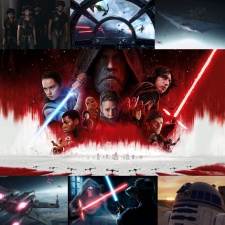 The latest blockbuster instalment in the movie series, Star Wars: The Last Jedi is releasing in cinemas this week. From the surprise smash hit of the 1977 original to the shocking disappointment of the prequels, nothing prepared us for the news that everyone’s favourite space opera was to be acquired by Disney for a massive $4.05 billion in October 2012.

After millions of voices suddenly cried out in terror, Disney ultimately didn’t infiltrate the franchise with mouse-eared Stormtroopers and abrupt musical set pieces as many had feared, but instead produced two great films - anything is a plus when compared to the prequels, right? Fans can now look forward to a roster of both standalone films and those that further the core story.

Thanks to George Lucas’ business acumen, Star Wars has always led the way with product licensing and Disney has certainly been paying attention. There’s a Star Wars theme park slated for 2019 and broadening the brand into tech, TV and toys, so many toys…

Of course, one of those new technologies is VR and AR, with Star Wars already being used for everything from proof-of-concept announcements to lightsabre demos and X-Wing missions. Let’s take a look at the brand’s presence in the emerging medium in its first year-and-a-bit and its potential to make XR mainstream.