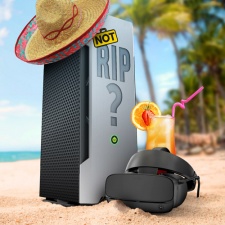 September 2021: We've all seen countless blogs and videos by influencers - not to mention the plethora of forum posts - decrying the imminent demise of PC VR now that standalone headsets are 'a thing'. That signal has only become amplified in recent months, following the success of Oculus' Quest 2 as it leads both VR hardware sales and Steam user data alike. So we had one thing to ask our expert panel...

The PC VR marketplace may not be growing as rapidly as the standalone market, but it is growing, not shrinking and therefore, it is not dead.

"The SteamVR connected devices stats show that each month, more VR headsets are connected to Steam/PC, currently approaching 3M units; about 2% of the user base.

"While the hardcore tethered PC VR headsets are getting squeezed in terms of overall percentages, there are still more people playing VR on a PC than ever before. The majority may be using an Oculus Quest or Quest 2 to do so, but they are considerable and growing in numbers.

"A section of gamers will always want the most high-end experience to appreciate the £1,000-odd they’ve spent on a Valve Index, which just isn’t feasible on a mobile-chipset-based all-in-one standalone VR device, currently.

"It is correct that most VR game developer focus is on standalone, namely Oculus Quest, (as the past few years of GDC developer focus surveys show) rather than PC VR, however. Whilst there are alternative mechanisms to getting your title into Oculus Quest owner’s hands (App Lab and SideQuest) if you aren’t accepted onto the heavily curated official Oculus Quest Store, developers can still target and appeal to the user base of PC VR.

"The ability to get funding for indie, own-IP titles is the bit that’s dying, making developers think more about balance and assign efforts accordingly to ensure they survive. This means opting for standalone VR experiences, not PC VR - now a small marketplace - but with support and success, they can serve both effectively.

"The PC VR marketplace may not be growing as rapidly as the standalone market, but it is growing, not shrinking and therefore, it is not dead."

The PC is where we will see the next innovations in VR take place. Then in time, that will feed into some form of mobile evolution.

"The PC still offers the most powerful platform and we need to remember that PC is not simply a desktop tower; laptops can be serious gaming machines now. The idea of mobile/standalone handling this to a high degree of longevity, fidelity and complexity is still a way off.

"PCs as a VR platform are going to show what the next step solutions are. Hyperrealism may be what's being pushed with graphics but I think it should be in the other senses to get VR out there. Wireless headsets will continue to evolve as a device, but the PC is where we will see the next innovations in VR take place. Then in time, that will feed into some form of mobile evolution. But for any of this to take place, we need to see the semiconductor industry settle down and supply chains re-normalise."

"Quest 2 adoption is the strongest of all VR headsets right now, but I don't think this necessarily means the death of PC VR. There are a significant number of users that are using it with PC, wirelessly streaming PC VR titles into their headsets.

"Additionally, when the chip shortage finally comes to end, we should see the costs of graphics cards coming down, enabling more people to attain hardware that's capable of running VR experiences.

"The Quest 2 is the ideal headset to allow both standalone and PC VR to thrive, as it's taken the place of both the original Quest and the Rift S. Depending on the application and use case, being able to wirelessly stream PC VR into the Quest 2 opens up so many possibilities for businesses like architecture studios, corporate training, manufacturing and more, but now there are (figuratively and physically) less strings attached."

My family bought a Sony Betamax VCR because it had the best recording quality. That format lost out to VHS and I think the same applies here to PC VR.

"I remain a total fan of VR, but I also remain sceptical about universal adoption until we have attained something like Altered Carbon style contact lenses - or at least some decent hybrid XR lenses that don't look like bad ski-goggles.

"However, what I find fascinating is that using my Quest is actually quicker and easier than using my consoles. As long as I remember to charge it up, I can pull it on my head and immediately be immersed in some amazing world of adventure. I can even plug it into my laptop and run PC-based content at the same time.

"I get that the quality isn't quite there compared with some of the PC VR options, but convenience always beats quality - and even Quest 1 was good enough. My family bought a Sony Betamax VCR when I was a kid because it had the best recording quality. That format lost out to VHS as a consumer medium for a reason and I think the same applies here to PC VR."

"I remember talking about the Quest potentially killing PC VR a year ago on my blog and already at that time there were some debates in the communities about it. Now the problem is even bigger with the Quest 2.

"I think that PC VR will never die; the question is whether it can become a big consumer market, or will it only ever be a prosumer one? The hope for PC VR is to have great content in the coming months - hybrid games like Star Wars Squadrons are okay - and this can happen also with the help of next-gen PS VR, which could draw the attention back to high-end graphics in VR games.

"If this doesn't happen, since the Quest market is so big, the risk is that all content will be made with Quest in mind, and PC VR will suffer the lack of dedicated games. Let's see…"

"I wouldn’t say that what we are seeing in the market right now is that PC VR is dead or dying. What we are seeing is that the landscape is definitely changing. We are entering a new era for VR where standalone headsets seem to be the catalyst making VR more mainstream, and more people than ever are donning headsets.

"With sales numbers of headsets like the Valve Index remaining steady, I would say that PC VR still has its place in VR and continues to see enough action to still be a consideration for developers.”

We’ll see a blend of the two. Enterprise applications are extending the life expectancy of PC VR, but consumers will go PC-free.

“If you believe VR is poised to really take off amongst at-home audiences and become a widely adopted piece of consumer tech, it seems highly unlikely that tethered headsets will have a place in this scenario. Following the pattern of other consumer electronics, cables will be shunned in favour of more sleek and accessible mobile options. Enter Quest 2.

“However, for those who believe VR is not a replacement for smartphones and TV, but rather for cinematic entertainment, it seems more likely that location-based virtual experiences will be where we’ll see most interest in the near future. In which case, the demand will be for premium content delivered fast and effectively, meaning PC-powered VR will prevail.

“The reality is, we’ll probably see a blend of the two. Enterprise applications are effectively extending the life expectancy of PC VR, but consumers will opt to go PC-free.”

The consensus among our panelists seems to be that while standalone VR may be the mainstream future, there's plenty of potential in PC too.

To paraphrase Mark Twain, it seems that the reports of PC VR's death have been grossly exaggerated.

As impressive as the latest standalone VR tech may be, it remains true - for now, at least - that a tethered set-up and a powerful PC still offers the best VR experience.

The global market has been anything but normal in the last couple of years and a Quest 2 is far more readily available than any 30-series GPU, which may prompt risk-averse consumers to follow the path of least resistance. Meanwhile, standalone hardware is undoubtedly more convenient and affordable, but it's also being used as a PC headset by many users.

Will PC VR be declared dead if it doesn't flatten less powerful hardware, or can the two co-exist? The consensus among our panelists seems to be that while standalone VR may be the mainstream future, there's plenty of potential in PC too.

We're platform agnostic here at TheVirtualReport.biz - good VR is good VR, after all - and we enjoy both quick-fix all-in-one snacks, as well as heartier fare from a PC. Maybe there's a value judgment in that wording, but we don't think PC VR's going to disappear any time soon.

At least not until cloud computing is a viable option for XR - which may not be as far away as we think - and then PC and standalone will both be dead in the water...