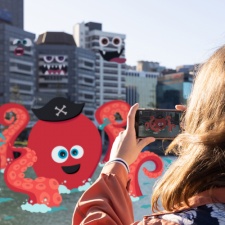 NZXR was founded in 2020 by former Magic Leap employees after their Wellington-based team was shut down during company-wide layoffs.

Since founding, NZXR has partnered with several companies to create AR experiences, including The Great Crane Cake Off with Qualcomm and AR skateboarding game Skatrix with Reality Crisis. During this time, NZXR has also worked on multiple projects with Niantic.

NZXR co-founder James Everett wrote in a blog post: "Over time, as we worked with people from across Niantic it became clear that we see the same future. One that is inclusive and accessible, where ubiquitous AR helps us become more engaged with each other and the world.

"At Niantic we’ll continue doing what we love, collaborating with some of the best in the business to make AR concepts tangible on in-development tech."

Niantic VP of visual and interaction design Dennis Hwang added: "The NZXR team will help us accelerate new kinds of AR experiences for the real-world metaverse where our explorers can create, contribute, and interact with digital objects in a way that is persistent and shared by everyone."

The purchase of NZXR is Niantic’s fifth acquisition within the last year, which include Scaniverse, Hoss, the majority of staff from Lowkey, and most recently, 8th Wall.

The company’s rapid expansion is no doubt fuelled by the success of its flagship title, Pokémon Go, which had its best year yet in 2021 with $1.2 billion in revenue. Not all of it's titles have the same success however. The studio’s latest title, Pikmin Bloom, failed to follow in the footsteps of Pokémon Go and generated $473,000 within two weeks of launch, compared with $116.4 million.