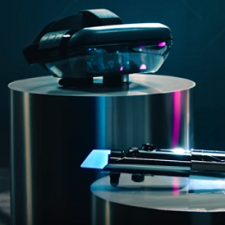 The bundle will consist of a smartphone powered Mirage AR headset, a tracking beacon and – crucially for Star Wars fans worldwide – a lightsaber controller. The headset itself weighs 470g, has three interface buttons and dual motion tracking cameras, while the beacon ensures accurate tracking of the location, while expanding and filling in the environment around the user.

The Mirage comes with smartphone mounting trays and will work with a range of iOS and Android phones such as iPhone 6 and 7 – including Plus sizes – Galaxy S7 and S8, as well as Google Pixel. Handsets will be physically connected to the headset’s Micro-USB socket and communicate with the Beacon via Bluetooth.

The Star Wars gameplay will include three distinct modes. Of course, that lightsaber controller is perfect for duels against the dark side’s Kylo Ren or Darth Vader.

Users will also finally get to play Holochess for themselves, as seen in Episode IV. The last mode is a combat strategy game, with large numbers of rebel forces face off against the Empire.

Lenovo’s Star Wars: Jedi Challenges will ship mid-November and is available to pre-order now for £249.99.