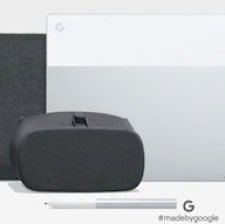 Google’s live event today centred heavily around the shift from a mobile-first to an AI-first world across all their products, starting with CEO Sundar Pichai’s introduction and continuing throughout presentations from the Home team and Pixel 2 smartphone.

Throughout the event dedicated to the latest ‘Made by Google’ hardware, the speakers reminded us that Google’s all about the intersection between AI, software and hardware.

Over an hour into the event, Aparna Chennapragada, Director of Product and Engineering at Google spoke about AR, mentioning ARCore. She shared brief clips of apps by interior design company Houzz, League of Legends and Lego.

Chennapragada demoed a new feature called AR Stickers that’s built into the Pixel 2’s camera and exclusive to the platform. And for once, the name undersells the product, as the ‘stickers’ are a world apart from the likes of Snapchat filters. The live demo showed characters from hit TV show, Stranger Things, that appeared onstage and reacted to things around them – including other character stickers. Chennapragada said, “It’s alive!”

Other brands available in AR stickers include Saturday Night Live, YouTube and the NBA – with a special mention for the forthcoming movie, Star Wars: The Last Jedi.

Chennapragada explained that the Pixel 2’s camera has been calibrated for AR, enabling it to, “Bridge the physical and digital”.

There’s no denying that Google Daydream View was transformative when it first released, using fabrics to centre HMDs as a wareable first, tech second, so we shouldn’t be too disappointed that the update announced at the event amounts to new colour options.

That said, the lenses have been updated – we don’t know how – to offer ‘The widest Field of View yet’.

The price for the revised headset will be $99.