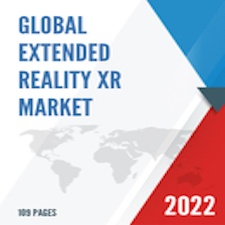 The report cites several major factors driving the growth of the extended reality market, including increased adoption in the education, industrial training, automotive, and healthcare sectors, as well as rising demand in the entertainment and gaming industries.

Speaking of its potential in the corporate events market, Valuates fond that they are complicated by a never-ending list of expenses and preparations, such as travel, lodging, training equipment, and so on. All of this, however, may be changed by utilising immersive technologies such as VR, AR, and MR, which can help businesses better utilise their resources while also reducing costs.

It also finds that VR is a game-changer because of the numerous benefits and extraordinary impact it provides, including convenience, infinite environmental designs, monetisation, and unlimited attendance for staff training and other company operations.

In dangerous and emergency scenarios, AR/VR can also be utilised to train and replicate operations. Firefighters are being trained to deal with catastrophic scenarios such as wildfires and aircraft burns using a virtual reality learning technology. Extended reality is also being used by anatomy students to construct very detailed 3D anatomical models.

One of the most notable uses of extended reality is surgical training. Immersive models allow doctors to practice skills without putting their patients' lives in danger, allowing them to master general surgical techniques or even invent procedures for more complex operations.

Valuates highly rates VR/AR in games, where the increasing use of extended reality in the gaming and entertainment industry is expected to drive the market. Furthermore, as the internet becomes more widely used and digital media grows in popularity, XR technologies will transform the entertainment industry.

The report also touches on the metaverse, saying that in the future, the way a user consumes and interacts with digital material will radically change.

Highlighting the automotive industry, the report calls out supply chain management, product creation, prototyping, and quality control as expected to drive the growth of the extended reality market.

Expansion in retail is projected to be fueled by rising demand for immersive experiences; creating memorable customer experiences has become a critical component of success. The report notest that VR can transport users to a three-dimensional virtual world where they can interact with brands in ways that are not possible in the actual world.

You can request a sample of the report here.