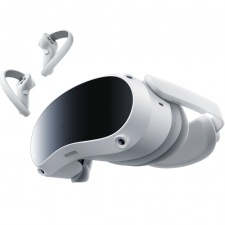 Earlier this year, Pico Interactive released its Pico Neo 3 Link to the European market as part of a beta program - see our review here. Now the VR headset developer has announced that the new Pico 4 will release in South Korea, Japan and Europe on October 18th. The headset is set to retail for €429. However, Pico Neo 3 link purchasers are eligible for a 35 per cent discount as promised.

“Everyone who participates in the beta program, should there be another product that comes from Pico within the next 12 months, they will be eligible for this discount,” stated Pico Europe General Manager Leland Hedges.

Pico 4 utilises pancake lenses to allow for smaller panels with less space between lenses to offer a slimmer, lightweight design. The device also has a 105° diagonal field of view, seven degrees wider than its predecessor. Per eye LCD resolution for the Pico 4 is 2160×2160 with a max refresh rate of 90 Hz. It also includes a 5K RGB camera for color passthrough, along with the four greyscale fisheye tracking cameras situated on the front corners of the device.

The headset features a battery in the back of the strap with a battery life of 3 up to hours. Additionally, the Pico 4 controllers have been redesigned to allow users to bring their hands closer together without the controllers banging together.

As of September 23rd, 2022, Neo 3 Link owners can preorder the Pico 4. All other interested parties will be able to preorder the devices in October.

Game exclusives can be a deciding factor for some gamers as to which device or system they purchase. Fans of Halo are going to choose Xbox over PlayStation, while God of War fans will likely choose the latter. Pico 4 has already announced its first exclusive, Just Dance VR, which will launch in 2023. Other games coming to the Pico 4 include The Walking Dead: Saints & Sinners Chapter 2: Retribution and Green Hell. The Pico 4 is compatible with SteamVR, allowing users to stream games from their PC wirelessly.