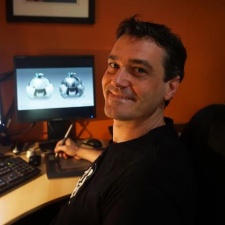 Laurent Kermel: My name is Laurent Kermel, I am the owner and creative director of Squidbeam Games. I'm also a professional visual effects artist and have spent my career working on big Hollywood blockbuster movies like Transformers, Star Wars, and Harry Potter. My greatest passion has always been playing and making videogames since the day I first laid my hands on a PC in 1984. In fact, I have been developing video games as a hobby for as long as I can remember. I actually created several games for the Atari ST back in the 1990s and even released some of them to the public in the early 2000s.

Being a one-man team has more than its share of challenges, but it's also a ton of fun and has exciting moments!

With Squidbeam Games, I've finally been able to combine my passion for video games with my professional skill set and experience as a visual effects artist, developer, illustrator and storyteller to create my own video game studio. For me, the unique immersion offered by videogames makes it the perfect medium to deliver captivating and emotional experiences and stories.

As for the team, well... I'm a solo-indie developer right now, so I create everything from start to finish myself. Being a one-man team has more than its share of challenges, but it's also a ton of fun and has exciting moments!

I pull a lot of my inspiration from early videogames from the 1980s/1990s (which I have been collecting and studying for a very long time). I think a lot of these games figured out ways to engage players with apparently simple and yet deep gameplay mechanics and this is, I believe, the cornerstone of creating a satisfying videogame experience.

As for the visuals, I take inspiration from everything really - from games, movies and books to a walk in the park or a visit to the local zoo. For me, it is all based around the kind of games I want to design and especially the type of mood or ambiance I want the player to feel or react to.

I wanted the game to get around the limitations of motion sickness, which I personally call VR's biggest nemesis.

Twobit Odyssey is my latest creation. It stars a little robot named Twobit. Players only control him using their gaze and they help him tackle problems and puzzles, and ultimately unravel the mysteries of the dark and enigmatic world they are in. The game was designed from the ground up to be a VR experience. When I started working on the project, I quickly isolated three main focus points.

Firstly, I wanted players to interact with a virtual character that will accompany them through their journey. To me, having a supporting character in the game was crucial. As you know, VR can be incredibly immersive, but I believe it can also give players an uncomfortable sense of isolation if not tuned right. However, I didn't want the gameplay to be solely built around a third-person view and this is how the little robot Twobit and its intricate relationship with the player was born.

Secondly, I wanted the controls to be as simple, transparent and intuitive as possible to increase the sense of immersion. This is why Twobit Odyssey's gameplay was entirely built around a gazing system and very simple inputs.

Finally, I wanted the game to get around the limitations of motion sickness, which I personally call VR's biggest nemesis. I am myself very sensitive to motion sickness - I actually spent a couple of weeks running test cases before starting any work on the game. I would recreate VR situations which I knew made me sick in the past, and then tried to understand why they did. Believe me, it was a tough process and on several occasions I had to stop, put my VR headset down and call it a day for obvious, nauseous reasons.

I then designed Twobit Odyssey around what I had learned from these experiments - even the way in which the little robot Twobit's design was created was meant to prevent motion sickness. For instance, you can at any time see what Twobit sees, however, the option displays a static noise when he rolls into a ball and travels to a new location. His head contracts back inside his body and when he does, players accept that they can't use his vision, not knowing that it was designed in part to shield them from the effects of motion sickness!

In VR, there is no real standard nor players' expectation on how to use an interface or play a game.

Well, I'll be able to tell you soon about the survival part! I am entirely self-funded and Twobit Odyssey will be my first paid game (I released all my other games for free), so the release of the game will answer that question...

But, beside the financial aspect of the question, I would say that a VR game is overall harder to design because the technology is still constantly evolving. It is a really good thing in itself, mind you, because the medium is still clearly in its infancy. New headsets, controllers and entire platforms are released all the time and it is very time consuming and fairly challenging to catch up and adjust to a constantly moving target. As a self-funded and solo indie developer, this has definitively been the greatest challenge for me. On another hand, the VR market is still relatively small, and this can help with visibility which is one of the main problems for indie authors today.

Another challenge that I discovered (and this applies to any VR developer, really), is that VR doesn't come with any language. What I mean is that if you display a menu in a traditional mouse-controlled game, then players will intuitively click on it. But in VR, there is no real standard nor players' expectation on how to use an interface or play a game.

Most times, when I demo my game at conventions, players who play the game often also try VR for the first time. This aspect of VR development has also been really difficult, because you never really know how players will react to a new UI element, control or gameplay idea, even if those elements have been used and proven to work in more traditional '2D' games for years.

Events like the VR Indie Pitch are rare opportunities for indie developers to share their creations. Being able to show our work to professionals in the field is invaluable.

How did you find the your experience pitching as a part of the XR Indie Pitch?

The VR Indie Pitch was a great experience and I thank The Virtual Report and XR Connects again for the incredible opportunity! As a solo indie developer, I spend most of my time in my office-cave designing games. I do sometimes come out of the dark, let my eyes adjust to the sunlight and show my work at local meetups and to friends, but I feel that events like the VR Indie Pitch are rare opportunities for indie developers to share their creations. Being able to show our work to professionals in the field is invaluable. For me, being runner-up was the icing on the cake really, because the feedback I received was already incredibly useful and thought provoking.

It was a wonderful recognition of the work I have been doing. But again, the experience was not solely based around that achievement and the incredible constructive feedback was the other invaluable award I also received that day.

Additionally, visibility has been a real challenge for me and I spend a fair amount of time spreading the word about my game, either on social media, discussion groups or local meetups and conventions. However, it sometimes feels like climbing Mount Everest and I hope this award and recognition will help more players discover and meet Twobit in 'virtual' person.

What are your hopes for this game in the future, and do you have any plans for any future projects?

I am planning to release Twobit Odyssey by the end of the year. It will be first available for the Gear VR. I have also been working on a visually augmented Rift version and more ports will follow. With Twobit Odyssey, I really wanted to create a VR game that offered a new and unique experience, and I hope players will enjoy it as much as I enjoyed creating it. My ultimate goal is also to keep making games, so my greatest hope is for Twobit Odyssey to allow me to just carry on down that path. And yes, I have more games in production right now and although I am focusing on Twobit Odyssey, I have many other projects in the making...