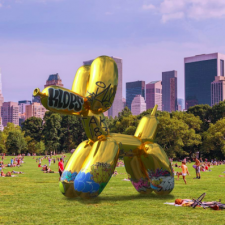 Artist and activist, ErraZuriz, and his studio, Cross Lab, released a virtual graffitied replica of the Koons sculpture to the exact same GPS coordinates. The BBC reports that this replica was first submitted to Snapchat by ErraZuriz, but with no response forthcoming, the studio created an independent app for people to view the vandalised work. This app is now ‘pending review’.

On 5th October, ErraZuriz posted about the work on Instagram, “It all seems fun, but I believe it is imperative we start questioning how much of our virtual public space we are willing to give to companies.”
He made five further Instagram posts on the subject, asking in one, “Central Park belongs to the city of NY. Why should corporations get to geo-tag its gps coordinates for free?”

One of the Instagram posts is a video in which ErraZuriz explained the importance of his project saying, “This [the sculpture] is vital because it’s the first of its kind, and the first of many more to come.”

Looking to the future, he added, “Now, we’re moving very quickly towards an AR life, where our daily commute will be filled with different elements, entertainment, information, advertisement, that will populate our lives as if they were actually there.”

His motivation for the virtual vandalism is that, “For a company to have the freedom to GPS-tag whatever they want is an enormous luxury that we should not be giving out for free. The virtual public space belongs to us. We should charge them rent.”