The Making Of PS VR’s Rogue One: X-Wing VR Mission 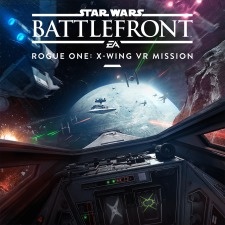 Not only is Star Wars: Battlefront – Rogue One X-Wing VR Mission one of the best PS VR experiences, it’s also safe for new players to dip into. Despite the high-speed space combat, it’s not a game that causes nausea. How did the team achieve that? It was one of the design topics addressed by some of the development team from Criterion Games in a BAFTA Crew Games Masterclass at the Princess Anne Theatre in London.

Obviously, Criterion couldn’t allow the first Star Wars VR game to make fans sick, so half the development time went into conquering that problem. They made the targeting reticule, the cockpit and the player’s virtual head move at slightly different speeds, so a jerk of the joypad doesn’t automatically swing the viewpoint around. They also carefully choreographed the action so that TIE fighter attacks usually come from the front, so that you aren’t barrel-rolling through space as much as you think. “It’s very similar to our work in Burnout,” joked producer James Svensson. “With the cars coming straight at you down the road.”

Lead Designer Mark Bridges found time to talk to TheVirtualReport.biz exclusively backstage at the event and answer some of our questions. He’s been at Criterion for over five years and his previous projects include Need For Speed: Most Wanted.

TheVirtualReport.biz: What are the challenges of designing for VR?

Mark Bridges: The biggest challenge is that it’s a new medium. We’re figuring it out as we go along. That’s why it’s a great fit for Criterion. We’re not afraid of biting off a challenge and really trying to figure something out and going back-to-basics and experiencing it for ourselves.

We put a heavy emphasis on prototyping, so we get things up and running as quickly as possible. And then we have conversations with software. So rather than kind of me writing down a white paper and saying ‘This is what I think will work in VR, we make it. We get some engineers together, and we bash something out, get people playing it, get them testing essentially to see if that’s a good thing, and then we move forward.

People are going to go, 'You have to see this! You have to fly this!'

We didn’t experience motion sickness in the game. And we know many people do with other games. Were you conscious of the need to solve that?

I was very, very conscious. It’s great that you said that. That was our number one pillar; to make sure that this was a comfortable, accessible experience. Because it’s Star Wars, because it’s on PlayStation VR which is the most mass-marketed VR headset going, we really thought this was going to be an experience that people are going to go, 'You have to see this! You have to fly this!'

We wanted that to be an experience that wasn’t marred by motion pull or discomfort. So we could have done really extreme handling models where you’re flipping and really, really going heavy on an X-wing Star Fighter experience. But we decided to hold back on that!

There was a lot of effort in making the experience match player expectation while delivering more comfort. So probably more than half of our dev time was on making sure that comfort was there, and constantly checking in with it and making sure that we didn’t make anyone feel nauseous.

What was it like working in the Star Wars universe?

We’ve all seen films. We’ve played a lot of games. But VR really doubles down on immersion, obviously, but it’s a really powerful too of telling a story and making you feel like you’re part of that story. You can sell the size of assets. You can make yourself feel part of it. At the start of the game, you’re in front of your X-wing. The amount of people that tell us they had no idea it was this big. They would get right up close to it, and they’d be looking at it. That was a way to experience Star Wars content that had never been experienced before. It was really exciting.

How hands-on were Disney and LucasFilm?

They were on the journey the entire way. We involved them as early as possible to make sure that they’re there with us and to make sure everything that we’re doing is canon and we’re not going to have any 90-degree turns anywhere along the way or any unexpected decisions. They wanted to build the best experience. They want to have the best experience that they can at the end of it, and we want to make the best game! So we both have common interests. As long as we keep each other in the loop as we go forward, then we end up with a great product at the end of it.

That is actually an authored cockpit that we made. It is based off the Rogue One X-Wings. We built it ourselves. It wasn’t from a digitally scanned cockpit that was made, but it was actually the third iteration we shipped in the end after moving placements around and things. We actually defined what all the buttons do! We went to Lucas and went, “Which button opens the S-foils?” Because we need to know, because we want to press it. They were like, “We don’t know. Which one do you think it is?” We were like, “Er, what? OK.” So we defined what all the buttons do, because we need that. It was really amazing!

Did you find the calibrator for the targeting computer? It’s the button next to it – if you press that one, then it will calibrate itself. And it does apply it nicely. And there’s lots of buttons that communicate with the droid behind you as well. Lots of little Easter eggs in there that are nice. Yeah, we really enjoyed putting those in!

The ships are all to scale. They’re all correct!'

With all of these ship models, was there a moment where they didn’t feel 100% right in VR, despite being accurate? Is that a thing?

That’s definitely a thing. It’s called interocular distance. If that’s not set right, your actual size of scaling and your perception of scaling is off. So that was one of the things we found out very early on. People would say the corvette looks too big or too small. When actually, it was about the distance not the model. As long as that was set right, that dealt with a lot of it.

We had a lot of feedback when we were playing it. The ships are all to scale. They’re all correct, and we did go back and forth, because this came up a lot. We were like, “This doesn’t feel quite right.” A lot of it’s down to your speed. So, the speed of which the X-wing is flying is quite high. So, actually your way of observing and measuring the size of a Star Destroyer is: how quickly you fly across it. It’s 1.6km from nose to tail, and you can cover that in about eight seconds, or something like that.

So that can then throw your frame of reference – it feels like it’s moving, this thing. Because you’re in space, it’s very hard to give you visual identifiers and human scale points of reference. If we put little scale men in there, all over the place, you would say, "It’s fine. It’s massive." But because there are no scale men and there’s nothing we’re used to seeing next to a Star Destroyer, it’s hard to say, "That’s the right size!"

At the start, the asteroid field helps. It’s a similar problem, though; not many people have seen an asteroid destroyed in space! One asteroid is 300 metres radius. It’s huge, and people don’t know that it’s that. The detail and the texture is really important. So it’s trying to put something in there that is kind of relatable.

Were you tempted to add anything new to the universe? A new ship?

There’s always a temptation. We got to do that with the cockpit. Star Wars is such a well-recognised universe that personally, my attention was on the gameplay and to get the experience playing great. Because it was set in the Rogue One era and it’s a mission story and the story ties in with the film, there’s a lot of things that were set in place.

We got the opportunity to use the U-wing, which was a new ship. That was really exciting, because in early development, that was something else. You’re finding a corvette cruiser in the asteroid field and escorting it. They they said, “Oh, you know what? We can actually make that a U-wing and then tie it into the story” – that was really exciting.

A lot of games are missing how powerful narrative and storytelling is in VR.

What’s the biggest lesson you’ve learned? What advice would you give to other developers?

I think there’s a lot of games out there that are missing how powerful narrative and storytelling is in VR. You have a player’s entire attention. You have their eyes, their ears, everything. Whereas 2D games on screen? A person has their phone. They’ve got kids. They’ve got a dog. They’ve got all the distractions. But when you’re in VR, you are basically saying, "Entertain me."

It’s like going to the cinema a little bit – unless you’re a talker in the cinema, which I’m not! But you are saying, ‘OK, I’m here. Tell me something. Send me on a journey that’s not something like I’ve ever seen before.’ And that’s an opportunity that I think is really powerful, and there are games out there that are starting to do that. It was something we really enjoyed exploring.

You can watch the full Masterclass for yourself here.

This VR panel was a BAFTA Crew Games Masterclass. Crew members got to meet the speakers one-to-one before the event. BAFTA Crew Games applications for 2017 close on Wednesday 22nd March and more information can be found at the site. For more expert talks and opinions from world-class developers, publishers and other VR professionals, sign-up for VR Connects (our very own US conference in June).