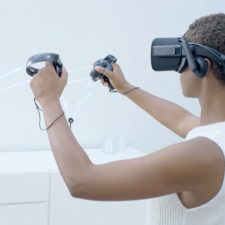 When a Vice President from global investment leaders Goldman Sachs tells you that, “Virtual Reality could be the next big technology that disrupts large sectors of the economy,” and “Wall Street is excited about the sector”, you know the VR industry faces rapid growth.

Marshall Roslyn cites Facebook’s $2bn acquisition of Oculus in 2014 as a major catalyst that brought VR sharply to the attention of investors. Since then, $793.5m investment in Magic Leap, as well as significant investment and activity from global brands such as Google and Alibaba have led to, “Wall Street analysts paying attention in a meaningful way.” The thinking is that these companies are perceived as ‘smart’, so they must have a reason for this level of investment.

Shift From Hardware Investment To Software

2016 has seen an explosion of VR hardware reaching consumers, with the Oculus Rift, HTC Vive and this week, PS VR go on sale to the general public. Steinar Svalesen, Partner at Beringer Finance, says that 70 per cent of VR investment this year has been in hardware, with just 30 per cent going into content. He expects this trend to reverse as content creators get to grips with the new systems and lower prices extend market penetration.

There’s no denying that PC VR is an expensive entertainment option in 2016. As Khayyam Wakil, VR Strategy & Innovation, Live Planet says, “It won't catch on until the price comes down and the picture quality goes up.”

VR is also a medium in search of its ‘killer app’ to achieve mass-market success; the experience that is too compelling for consumers to ignore. The fact is that, “The content that's going to make VR mainstream hasn't been created yet,” according to George Scotto, Director Cryengine at Crytek. Although it’s likely to be driven by the games sector, Tommy Palm, CEO and Game Designer at Resolution Games thinks that, “VR is too important to be wasted on a handful of gamers.”

Marshall Roslyn agrees, believing the VR industry shows $100bn potential with, “A massive market that could impact a number of industries.” He’s of the opinion that, “VR could replace many of the screens that exist today,” emphasising the entertainment, theme park and mobile phone sectors.

Build It And They Will Come

Despite long-term bullishness about VR, Sand Hill Road investors today are sceptical about how the market will play out in the short term. The industry is still too young and Roslyn tells us that, “Investors are looking for more robust consumer adoption. They want to see what the use cases will look like before jumping in.”

Hilmar Veigar Petursson, CEO of CCP Games jokes that the 1995 Virtual Boy probably still has a larger installed user base than the current headsets and as a result, “Triple-A hits are not going to be realistic in a low user install base.”

Although passionate about VR’s future, Petursson also warns that VR developers should expect, “A walk in the desert for five years.” He believes the market will be hard for 3-5 years and that 2017 will be ‘super tough’, before beginning an uptick in 2018 with a profile boost from Spielberg’s highly anticipated VR movie, Ready Player One.

Petursson believes that the key to success in VR business lies in understanding what people will pay for. The medium is so new that potential content types remain largely untested; will the successful business model be, “More mobile, pc, or console?” His advice to the VR development community is to, “Focus on user behaviour, access and retention - then worry about the business model.”

If Petursson is predicting a rocky road for VR developers in the next 3-5 years, what can they do to ensure their survival? Don Stein, Founder of Virtual Reality Investments suggests that, “Creative companies establish a reputation with contract work before working on their own projects.” Petursson describes this kind of consultancy work as, “Scrappy stuff that is not the most exciting to do, but you will gain skills that you can later parlez into a consumer product.”

Dadi Ainarsson, Co-Founder and Creative Director of RVX, has another take on consultancy work, saying that with Steam’s worldwide distribution, “VR creators can produce original IP instead of working for hire for studios.”

Sand Hill Road May Be Waiting For The VR Industry...

...but the industry isn’t waiting for Sand Hill Road, according to Marshall Roslyn who says that, “We're seeing non traditional investors getting involved, with VR companies looking to Asia - and specifically China - for investment.

China has been very forward in its interest in the VR industry, right the way up to President Xi Jinping, and Chinese investors have been actively seeking out VR opportunities over the last couple of years. There’s been a great deal of momentum in the territory - potentially making Chinese consumers the most important market - but Roslyn cautions that Goldman Sachs is, “Starting to sense a little pullback from Asian investors in the last couple of months.” He puts this down to caution, “About overly buying into the hype; particularly when they see overseas investors sitting on the sidelines.”

The developers and publishers that have pushed to the front of the VR queue are already demonstrating that profit is possible in the sector. CCP Games revealed the company has invested $30m in VR, having already recouped $25m. The Icelandic developers expect to break even by the second quarter of 2017.

Petursson observes that, “There was a time when you could experiment with VC funding, but that window’s going to close next year.” His reasoning is that because the main VR hardware is out, developers will be expected to monetise their games and apps from the consumer. As he puts it, “If nobody pays for it, it doesn't work!”

Phil Chen, Managing Parter at Presence Capital cautions that, “Making money right now absolutely does not guarantee your future.” So what can you do to make your company as attractive as possible to potential investors? Christina Bechhold, Principal at Samsung Global Innovation Center believes that, “The key to getting additional funding is testing hypotheses over the time of funding and pivoting to a way that will be profitable.”