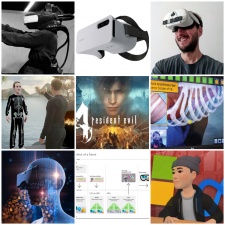 It was terrible then, and it’s terrible now. By Ethan Zuckerman

The VR remake of Resident Evil 4 has a design oversight causing some players to hit themselves in the chest, exposing some of VR's flaws.

3) Will Zuckerberg’s ‘metaverse’ change everything?

Facebook wants to build the VR universe we all live and work in. Here’s what’s actually coming.

Having well-trained medics and other military health care professionals can mean the difference between life and death for U.S. service members.

This article is an introduction to understanding the significance of performance for your Mixed Reality app.

6) Ultraleap Gemini is hands tracking at its best

I have tried it and I’m going to tell you my impressions about it! By Skarredghost

8) The battle to control the metaverse: Microsoft vs Meta

Office workers will decide which tech giant dominates the more immersive virtual world, according to the Financial Times

With his plans for a virtual reality metaverse, the Facebook founder pitches himself as a cultural impresario of the internet’s future.