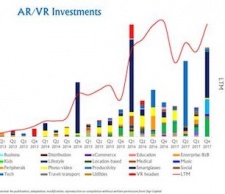 The latest report from Digi-Captial reveals that the XR industry realised $1bn investment across 27 VR/AR sectors in Q4 2017.

Major investee, Magic Leap, is developing an AR ecosystem, but unlike Niantic and its success with Pokémon GO, is yet to release a product. Magic Leap saw similarly significant investments in 2016, raising $800 million in February.

Managing Director at Digi-Capital, Tim Merel said, “The early stage of the market means that VCs’ typical 3 to 5-year time frame is about right for investments being made today, as we are still at the earliest stages of what the market could become. Long-term dominant players should emerge to cash in their golden augmented tickets, but that might not happen before 2019.”

Trends displayed by Digi-Capital’s infographics indicate that the VR/AR industry fluctuates in terms of investment throughout each year, but are still on the rise compared to previous years.