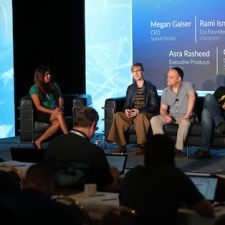 At the GamesBeat Summit in California, Alex Handy finds out how Sci Fi favourites such as Star Wars, Star Trek, Neuromancer and Snow Crash have informed VR’s development – and how in turn, VR helped to make Rogue One a reality.

The GamesBeat Summit in Berkeley, California this week was packed with the best and brightest leaders in the video game industry. The event was focused heavily on Science Fiction's influence on video games and technology, and as a result, a great deal of the discussion was around effective storytelling in interactive mediums.

VR was naturally one of those mediums, and opinions varied widely on just where this hot new technology will land. Jamil Moledina, games strategic lead at Google Play, opened the event by reminding the audience of the holographic chess set in Star Wars: a New Hope, and the Holodeck on Star Trek. These devices are both a big part of the road map for every VR and AR developer in some way or another.

Emotions In The Metaverse

Tim Sweeney, founder and CEO of Epic Games, said that he's expecting VR usage to grow rapidly in the next few years. "I think we're getting there really quickly already," said Sweeney. "Look at Facebook's Social VR platform. The big thing we're lacking right now is the deep input required to really place humans in the environment. Inward and outward cameras for your face, so you can really connect in the Metaverse experiences on an emotional level. I think that's the missing component right now. Once you have that, you're going to have experiences that are much more human in nature."

Sweeney is expecting VR devices to become increasingly powerful, and said that he expects that within two generations of the hardware for the equipment to be good enough to produce realistic human faces in interactive environments. He said he expected facial cameras to be in place as early as three years from now. "The real centre unifying technology is digital human technology," said Sweeney, referring to the ability to render a human realistically in 3D. "Being able to render a face with hair and a body accurately, and to simulate the intelligence of a human."

He said that China may be a big source of VR innovation in the coming years, as well. "There's an interesting trend in China," said Sweeney. "They've made massive investments in VR and AR hardware, and also in software start-ups. There are huge sets of investors there who are willing to lose money for several years building VR companies, that are making very long term investments building experience with games and social, and knowing they won't make money for five to ten years now."

That's different from the situation in the west, said Sweeney. "[The west] went through this big VR investment boom here. Now we're seeing an investment bust. In another 10 years, I think the world will be moving largely to AR hardware, and we've got to be willing to invest."

Another thing Sweeney is worried about is the emerging Windows S platform, Microsoft's Store-centric Windows distribution. Sweeney cautioned that Microsoft now has the ability to lock you out of your Steam library by enforcing a Windows App Store Only policy.

Snowcrash And Neuromancer A Way Off

Kim Pallister, director of the VR Center of Excellence at Intel, said that the VR experience people expect finds its roots in science fiction like Snowcrash and Neuromancer. He said those experiences are very far off from where the current hardware exists. "It feels like the current set of hardware - the high end enthusiast hardware - has tipped us over a point where people feel the magical experience, but it's really only just the beginning of those experiences that truly work," said Pallister.

"I think game developers would do well to examine the areas where VR is being deployed for business. It's not their entire workforce is in VR, but they have a workflow, and they want to accomplish something so for this workflow we're going to go into VR. Having components both inside and outside of VR makes it feel more natural in a way," said Pallister.

Gary Whitta, screenwriter on Rogue One: A Star Wars Story, is also a longtime gamer himself. He was, in another life, the editor in chief of PC Gamer magazine. As such, he has also dived into the VR space headfirst; he's bought all the gear. He said that, as a storyteller, the shorter ideas in his mind are compelling ideas for VR.

But it was in his work on Star Wars that he saw VR used to full effect in the business of movie making. "We would go down to Industrial Light and Magic and say, 'We need a rebel base and a tower.' They went away and built them all in VR and AR spaces. We had Wiimotes, and we could walk around a rebel base, or on top of the Imperial communications tower on Scarif. It felt like what it was like to be on the final set of the film. The real thing was only 20 feet up, but we were 500 feet up in VR. When the time came to build the sets, [film director] Gareth Edwards felt like he'd already been there, to an extent."