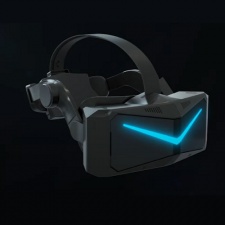 We enjoy a good future-gazing marketing ploy as much as the next person, but a full live stream promoting something that won't be released for at least another year? Sighs*

It's almost as if Pimax wanted to do a land grab ahead of Facebook Connect this Thursday...

If you want to keep your brand in front of consumers, then we suppose now is the time to repeatedly mention the metaverse and coin a term like 'VR 3.0' - not to mention a last-minute hail mary of 'retina display' for good measure. But let's give Pimax the benefit of the doubt in basically saying to the development community in good time that, 'We've done our bit - what can you make of it?'

The specs for Pimax's new Reality 12K are undoubtedly enticing (see below), but they're also dubious with such a long lead time: 12 months out, VR fans! We played along until we heard the unforgettable/unforgivable line that, "You can enjoy PC VR content as well as standalone VR content using one single device… It's never been like that for any other VR headset." Thousands of Oculus Quest 2 users might beg to disagree, but never let the truth get in the way of a good marketing quote, right?

The Pimax briefing established a pattern of VR choices between 'this or that', from fresnel vs aspheric lenses; LCD vs OLED displays, PC or AIO - and of course, Pimax had the ideal compromise for its audience of 'Pimaxians' in each scenario, because they 'deserve both' after all. Not that the company compromises, you understand.

The stream was largely delivered by Joshua Scott Son, associate director of Pimax Global Communications. He shared that the 12K's compound lens design combined the best of both traditional lens types with 'imperceptible god rays' and a 'huge sweet spot', with 'zero distortion effect across the entire Field of View'.

Scott Son reminded us that while LCD's aren't black enough, OLEDs can look grainy, which is why he said that, "We are the world's first to implement Mini-LEDs". Obviously, he meant apart from Varjo, whose new consumer Aero headset that uses the same tech is available to order right now...

'What is the metaverse?' Apparently, it's a teepee!

The metaverse. Are you as bored hearing about it as we are writing about it? Doubtless it will one day blow our tiny minds, but right now? It's just another bandwagon for zeitgeist-chasing brand managers to jump aboard.

While the rest of us are disagreeing about definitions and terms - and name-dropping today's hottest cultural reference, Snow Crash - Pimax has the answer to the question of the day, 'What is the metaverse?' Apparently, it's a teepee! Okay, Scott Son had a point when he connected our childlike imagination with shared spaces, but then he had to pile on the PR saying that, "Only a VR3.0 device can get you there". And YOU could be first!

Pimax's vision of the metaverse is based around what it calls the three indispensable traits of the metaverse: naturalness, self-awareness and freedom. Part of that process is partnering with Tobii to provide eye-tracking and with it, Dynamic Foveated Rendering. This is a good thing.

A console dedicated to play VR exclusively with Pimax headsets.

Either/or - unless it's both

Pimax would have you believe that VR boils down to a dichotomy of PC VR vs standalone that only its Reality 12K can defeat. That's why it wants you to call the new headset an 'Omni all-in-one'. We don't get it either...

Scott Son explained Pimax's Gemini architecture that combines a Qualcomm XR2 - the exact same that you'd find in an Oculus Quest 2, remember - with a customised Pimax solution too. The headset can be fed images from PC via a 'fiber-optical' cable or a WiGig wireless module via WiFi 6E.

As an alternative to a VR-ready PC, Pimax will also sell you a portable VR Station with internal storage that it describes as, "A console dedicated to play VR exclusively with Pimax headsets." While the Reality 12K boasts some impressive specs, it was only later in the presentation when we learned that they will vary depending on whether you use the headset in PC VR or standalone modes. (See full specs below.)

The Reality 12K features a modular design with first-party options that include lighthouse or 5G face covers, with potential for third-party accessories such as scent emitters, cooling fans or blood oxygen monitors.

Are you ready to enter the metaverse?

Elica Niskanen, ambassador and spokesperson introduced both Pimax Studio and the Pimax Store saying, "Are you ready to enter the metaverse?" Hashtag clang, but it was an invitation for developers to initiate a, "Deep bond of content and tech," with Niskanen enthusing that, "We must participate together as a team of VR enthusiasts." She introduced Pimax's Pioneer Plan that will offer, 'Support, benefits and promotion' to developers, as long as they register for the program by end March 2022.

We have no doubt that Pimax will release a truly awesome VR headset in due course.

And like any good episode of Columbo, Pimax left us with 'one more thing' - the tantalising prospect of (Fixed) Retina Display (FRD). With a year to go before release, we can only conclude that they're just playing with Varjo and Oculus alike at this time.

Given the Chinese manufacturer's undeniable track record of producing top-tier VR hardware, we have no doubt that Pimax will release a truly awesome VR headset in due course. It will most likely stand proud amongst any competition - as long as the spec is still valid in 12 months. But to release such a wishlist of features this far out from release smacks of desperation and putting a flag in the ground just in case we forget they're out there.

We haven't forgotten you, Pimax - and we look forward to you continuing to push the boundaries of VR hardware in the future. Maybe just talk to us when you actually have something to say next time, okay?

That's about the same price as the recently announced Varjo Aero - including controllers and trackers - with an added bonus of a 12-month wait. At this point, we don't even know what Pimax are thinking, let alone understand their obvious enthusiasm.

Good news for previous Pimax owners is that their previous purchase price will be deducted from the cost of a new Reality 12K. Original Kickstarter backers will also receive an additional $100 discount. Pimaxians - shudder* - who place orders will be prioritised in the first three months of release.