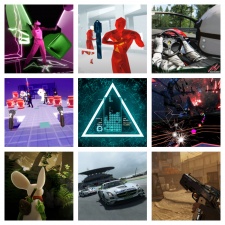 We love VR games here at TheVirtualReport.biz and after five years reporting on the industry, we thought it was high time we shared our all-time favourites with you. These are the games that not only have that all-important 'Wow!' factor, but that we also find ourselves coming back to, time and again.

Presented in no particular order, we've included everything from sci fi shooters to puzzle games and racing sims to rhythm action, featuring games that are ideal for playing in short bursts, as well as campaigns that will take hours to complete.

Note that this is not a list of the biggest-selling games, nor perhaps of the most innovative - and you'll doubtless remark that some of the most popular titles are nowhere to be found. But that's okay - remember these are just our favourites.