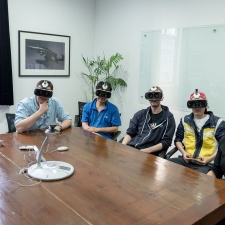 “Science fiction is becoming science fact,” Says Hilmar Veigar Petursson, CEO of CCP Games. “We live in this super-interesting time when you feel the singularity knocking.” He’s talking about the combination of technologies that are all coming to fruition at the same time with Virtual Reality, Artificial Intelligence, cloud computing, Bitcoin currency and our understanding of the human mind.

Petursson’s vision is that this unprecedented synergy of emerging technologies will ultimately create, “Virtual worlds more meaningful than real life.” Brett Leonard, Hollywood director and CCO of Virtuosity observes that, “Brain data shows VR can affect your brain more than reality. There's something about this media that makes it hyper real.”

Petursson predicts that humanity will evolve, “From monkeys to digital phenomena.” And he’s not alone in such lofty predictions for VR; Chris Traub, Chairman and Co-Founder of the SES Group believes that VR has the potential to be as revolutionary as fire or farming to the development of the human race. He says that VR will add, “New dimensionality to human experience.” And describes a release of physical limitations, “Where we don't have to engage directly with anyone if we don't want to - or we can engage with people in ways we never thought possible.”

That theme of evolution also struck Dadi Ainarsson, Co-Founder and Creative Director of RVX who recalls that, “Trying Vive for the first time, I felt my old brain having an argument with my new brain.” Marshall Roslyn, Vice President at global investment leaders Goldman Sachs also describes the first experience of VR as, “A life-changing experience.”

Roslyn believes that personal computing’s development won’t end with mobile and will develop into VR and AR interfaces that, “Will create less friction in our lives and move the frontiers of computing to something more intimate.” Steinar Svalesen, Partner at Beringer Finance echoes this ideal of eliminating friction; looking for simplicity, not complexity, across open ecosystems instead of closed platforms. He also sees embedded payment structures within VR itself as central to its success.

Brett Leonard says of VR, “This is not a peripheral like a keyboard or mouse; this is more like the beginning of PC computing. VR's going to disrupt every layer of human communication.” And with that disruption will come a lot of questions about expectations, standards and conventions; as Traub puts it, “What are the new etiquettes?” CCP’s Petursson anticipates an industry shift away from gaming towards, “Extremely accelerated experiments on what makes people tick,” Or in other words, “Exploring the next stage in human evolution.”

Kjartan Pierre Emilsson is the CEO and Co-Founder of Solfar Studios, best known for Everest on HTC’s Vive. It’s a striking experience full of a sense of space and scale, but it’s an unexpected debut from a team with so much games experience. Emilsson said that, “Although we're all from a gaming background, we did Everest as an experiment to see how you can do experiences that are immersive, so we didn't gamify it too much.”

At The Bottom Of An S-Curve

The consensus is that VR technology today is at the bottom of an S-curve; research, development and understanding will begin slowly before accelerating rapidly and reaching a final plateau. But what will the view be like from that plateau? Ainarsson captures the industry’s mood when he says, “We don't know what VR will be, but it will be its own thing.”

Ainarsson also observes that, “People are making games or movies because that makes sense.” So we’re now only seeing the first wave of software as we stand at the very bottom of that S-curve; developers are most often returning to the familiar rulebooks that have stood them in such good stead and repeating games that have been done before. Oddur Magnusson, CTO and Founder of Klang Games offers, “No one knows what VR is and no one knows what they're talking about. And AR is even further away.”

But for the second wave, the development community will take their learning and understanding of the medium’s potential to create something new. Although as Ainarsson says, “We're not going to figure everything out in five years.”

Especially not if scientists and researchers like Dan Cook, Founder of EyeMynd Brainwave VR have anything to say about it. While Oculus is still trying to figure out inside-out tracking, Dr Dan is leaping ahead by putting brainwave sensors into headsets right now. His ambition is to move, “Beyond controllers” to allow us to convey expressions and emotions through cognition, as well as more accurate tracking of the body – right down to your fingers. Basically, he’s brain hacking. Cook expects to deliver the first headsets to developers next year.

As for the power of the human brain, Solfar’s Emilsson advises that we should, “Never underestimate the mind’s theatre.” He recalls that after completing their Everest demo, one person remembered the boots his character was wearing, right down to the colours, “Even though we never rendered the feet!” His advice to VR developers would be that, “It doesn't need to be real; it just has to evoke it.”

It’s this kind of anecdote, along with Petursson’s vision of, “Virtual worlds more meaningful than real life,” that prompt the line of thinking that the human body will become optional, but the brain will be around for a long time. Taking this to its logical conclusion, Petursson envisages a, “More sustainable way of living if we live digitally.”

Similarly Cook asks, “Can we use these technologies to end world poverty?” That might seem a bold claim for what is now largely seen as an optional entertainment medium, but the prospect of existing in the digital realm begs the questions, “What is a human being? What is money?”

If Virtual Reality has the capacity to significantly impact upon ‘actual’ reality, these questions could become fundamental to our future as a species. As Cook says, “Once you have access to the inner workings of the brain, the game changes.” So the question is, “What kind of society do we want to create?”

This article was first published in 2016*.