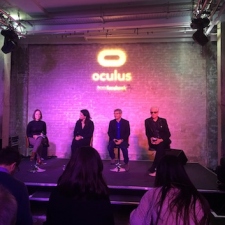 With December on our doorstep and Christmas right around the corner, Oculus hosted a media showcase in the heart of London called - appropriately enough - Oculus Unwrapped.

Behind an unassuming grey frontage tucked away on a narrow brick road near Tobacco Dock, three massive rooms snaked around the premises. Each of them packed with VR demos awaiting the crowd of XR industry and media professionals as they stepped in from the greyness of a bitter November afternoon in England’s capital.

At the end of the breadcrumb trail of demo pods, free bars and stageshow lighting was a raised dais with four chairs in front of an exposed brick wall. And just in case there was any doubt about who was payrolling the whole shindig, projected upon this wall were the words, ‘Oculus, From Facebook’.

We took our seats in the subdued lighting, faces lit by the glow of laptops and mobile screens and waited for the speakers to step onstage.

Yelena Rachitsky, Executive Producer of Experiences at Oculus has a warm manner that is at odds with her sharp cut bob. She guided the conversation with a nod of encouragement or a nudge in the right direction as the panellists navigated a range of topics from their first experiences of VR to future hopes for the technology.

Rachitsky’s enthusiasm for the emerging medium is evident from the start, as she marvelled at how in the space of its first year a, “Whole new technology and market was created and the audience is just beginning to form”.

From outside the bubble, it may seem that little progress has been made since the headset launches of 2016. But keeping up with advances in software, learnings in immersion, narrative and development, as well as new hardware in a rapidly evolving market, we could relate when Rachitsky joked that, “I like to think in terms of dog years, because one year in VR feels like seven years in real life - everything moves so fast!”

The only way to learn is to dive right into it.

One of the big brands that has led the charge into immersive reality is Hollywood studio, Warner Brothers. Where other moviemakers have hung back to see if there really is a market, Warner execs could see its potential and hope to capitalise on an early mover advantage with tentpole franchises such as Harry Potter and unit shifters like Lego.

But where do you start creating experiences when there’s no precedent to follow? Jessica Schell, EVP and GM, Film at Warner Bros. Home Entertainment said that, “The only way to learn is to dive right into it.”

And the company wasn’t just learning about VR content, it was learning about VR business. Schell observed that, “This is the next evolution of distribution and our whole organisation needs to move in that direction.”

The Movie - And Money - Making Machine

Hollywood is a money-making machine that has become increasingly reliant upon remakes, reboots and sequels to appease shareholders, so a major studio wasn’t about to gamble on a new format by funding standalone projects.

Schell said that even now the, “Monetisation isn’t there yet”. But the desire to create VR was still there; the company needed to understand what this new thing was, how it worked and how it could work for them as a business. Dressed head to toe in black, she offered the suitably sombre caveat that, “While we’re looking to the future, we can’t do anything to damage our core business of film-making.”

As Schell recalled, “We started incubating VR projects through our marketing budget.” The first project invited viewers to join the Suicide Squad for its disappointing performance at the summer box office, but since then the program has brought to market the mighty Batman Arkham VR from Rocksteady Studios, as well as Framestore’s frankly fantastic marketing exercise, Fantastic Beasts and Where to Find Them: VR.

It was the shock of the new. When it worked, it was magical. Afterwards at the premiere, the actual movie felt a bit flat.

Shock Of The New

Fantastic Beasts was the first taste of VR for film critic, Jason Solomons, who regularly reviews movies for the likes of Sky Arts and the BBC. He was ambushed en route to the New York premiere of JK Rowling’s first cinema outing sans Harry Potter and recalled the experience with enthusiasm saying, “It was the shock of the new. When it worked, it was magical.”

Peering out through trendily ironic black framed spectacles, Solomons declared that he had absolutely no interest in trying VR before that day. After all, why would a serious film critic trouble himself with such a novelty? Imagine the stubble-that’s-not-quite-a-beard scratching hours later when, “Afterwards at the premiere, the actual movie felt a bit flat”.

Solomons later became so immersed in a Korean slow cinema VR experience at a film festival that he has no recollection of the venue or even whether he was seated or standing at the time. In his own words he, “Surrendered entirely to the film,” which he believes raises moral questions when viewers can become, “So immersed you feel that you could disappear”.

It might sound a strange thing for a film critic to say, but Solomons is of the opinion that, “Conventional films lack excitement. Where are the breakout actors and creators?” Then he gesticulated expansively towards the room full of Rifts saying, “The excitement is here.”

And that excitement isn’t restricted to technology evangelists, early adopters and the XR industry; it can also be found in conventional creators. Solomons shared an anecdote from a conversation with successful director John Landis who said, “Imagine if we could have made the Thriller video in VR!”

Some of that excitement comes from the prospect of a medium that can be fine tuned by its practitioners. Cinema is an imperfect art form in that it is a collaborative effort that can fall short of the creator’s vision. Solomons said that, “Directors try to tell people what they want in a scene, watch it back and feel it’s nearly what they imagined. With VR, it could end up looking how they thought about it.”

Schell’s outlook is slightly more tempered as she cautioned that, “We’re not there yet.” She said that there is a trade-off between interactivity and “Visual gorgeousness” noting that, “Re-importing assets into a game engine doesn’t allow for the same visual fidelity.”

Solomons is of a similar mind when he said, “We’ll be there in three or four years and I’m excited to see it, what it will say and what it will be.”

When the world’s oldest film festival decided to include XR for the first time, Venice Film Festival isolated all VR content on an island that is a former leper colony. Solomons asked whether this is a fitting, “Metaphor for this newcomer.”

Raindance Film Festival has been running for a quarter of a century since being founded by Elliot Grove in 1992. By way of contrast with XR’s life in the margins at Venice, Grove said that Raindance, “Decided as a festival to put it right in the mainstream.” The result was that, “Creators realised they were being taken as seriously as 'flatties' and the audience were blown away.”

Grove noted that even though Raindance is a film festival, “There’s a big difference between film and VR.” He’s of the opinion that VR’s closest narrative relative is not cinema, but immersive theatre.

From behind the dark glasses of an auteur, Grove asked an uncomfortable question; “The VR industry has been very reluctant to hand over control to the content creators. Will manufacturers relinquish control to the artists?” It wouldn’t be hard to imagine that point made, Grove leans back in his seat, swirling a brandy in one hand while in the other, a Gitane sends a spiral of smoke to the ceiling.

Rachitsky highlighted the first creators who are, “Experimenting” with VR as a medium, saying that while there were rules for creating VR in the first year, “In the second year, everyone threw those rule books out.” She believes that we are now witnessing the convergence of storytelling and interactivity; “We’re starting to learn how to tell a story with someone’s whole body. We’re also teaching the audience how to experience something differently than ever before.”

Where it took decades to add audio to silent movies, VR is adding to its lexicon in a short timeframe - and doing that growing up in public. Everyone’s learning together; as creators are learning how to tell stories, audiences are re-learning how to read them. Solomons considered that, “Narrative art starts with the writer and when they master the possibilities, we will see it breaking into the mainstream.”

He likened the VR of today to the early days of cinema and the Lumiere brothers’ L'Arrivée d'un train en gare de La Ciotat, which had audiences run screaming at the sight of the approaching train.

And as for that spectre of monetising VR content, Schell admits that, “We need more opportunity to create a business model around this. If we want a robust industry with a lot of content, we have to figure out how to make this a business.”

For his part, silver-haired Grove delivers the piercing statement, “We need to convince YouTube to share more of their buckets of gold from advertising.”