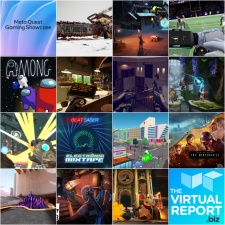 October's Facebook Connect event - pre-rebrand, remember - may have been notable for being almost entirely devoid of games, but Meta has just redressed the balance with the Quest Gaming Showcase 2022.

We noted a large number of sequels in the showcase, but where that may have drawn inward groans had it been a console event, we actually see it as further establishing VR IP as the fledgling sector matures. With many lessons learned from the first time around, we expect this next generation of software to be even more immersive, accessible and attention-grabbing than ever.

See what Meta's VP, Metaverse Content Jason Rubin had to say about the Showcase and the wider world of VR in our exclusive interview here. And if you're in the mood for interviews, we had a good chat with Tom Ivey, Lead Producer on Resident Evil 4 VR at Armature Studio about bringing the much-loved Mercenaries mode to Quest 2 here.

And now, the latest information on every game featured in the Meta Quest Gaming Showcase 2022…