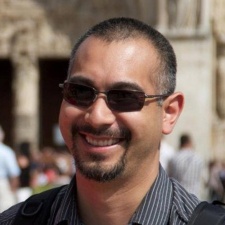 Last week's VR Connects conference had over 800 registrations and saw over 30 speakers and panelists share their wisdom at the Bespoke in San Francisco.

Among those presenters was Aruna Inversin, movie VFX expert turned Digital Domain's VR/AR Creative Director. He delivered a superstar session on Wednesday 28th June to a packed room, talking through the creation of a unique immersive NBA experience.

We grabbed him to talk about his work on Hollywood juggernauts The Matrix and Fast and the Furious to sporting royalty like Nike, Neymar Jr and the NBA. Inversin explains his love of VFX, how VR technology is catching up with creatives and why AR is really taking off.

TVR.biz: How did you get started in the entertainment business?

Aruna Inversin: I started in visual effects in Vancouver. I went to Vancouver Film School originally for 3D model and animation and I fell in love with the actual visual effects side of animation. There was a lot of things coming up at the time; Reboot and straight-to-TV animated things.

But I wanted to focus on digital effects in TV and film. I started 20 years ago doing compositing, and then from there I did a lot of freelance work in Vancouver and Australia and the US. I settled down in the US in the Bay Area, doing some Matrix, some Constantine, a bunch of really cool stuff.

But I wanted to do more and learn more. After a certain point at certain companies, you feel like you need to move up the chain. But at the same time, you become the big fish and you’re not learning as much! I felt like I was kind of stagnating.

At that moment, Digital Domain picked me up. I had a call saying, “Hey, do you want to come down and work on a Clint Eastwood film?” I’m like, “Uh… yeah! (I don’t know how many more movies he’s going to do!)" That was Flags Of Our Fathers. I moved to LA, started working on Flags, and started my new career in LA. Worked on a bunch of other movies – everything from Meet The Robinsons to Furious 7 and Blackhat.

One of the other VFX supervisors at the time, Janelle [Croshaw], was supervising a 3D 360 film called Evolution Of Verse. It’s very popular. We did all the CG creation for that. That was the first project, I think, that DD did, doing photo-real CG in 360-degrees in stereo.

How did you transition into Virtual Reality from there?

Janelle was on her next project and she brought me on because she was super-busy, and I’d expressed interest in VR. And that was the Björk Stonemilker project. That was also stereo, with Björk in Iceland. We got the footage, stitched it, put multiple Björks in the location. So that was our second piece. That was all live-action, but cut out so she’s running around. Really cool, really cool. So I worked with the director on that. And then after that, it’s been a plethora of other types of VR experiences. A lot of the time, it’s mostly been 360 VR experiences in monoscopic.

Then we got nominated for was the Neymar Jr experience. That was a really huge one. Janelle was the VFX supervisor, and I ran the floor. I was there, working with her on how to shoot it. Because nobody really knew! We had this elaborate setup and a huge amount of infrastructure.

We’re shooting in Barcelona for eight days. It’s a big budget thing. So Janelle didn’t want to go in there blind, and I kind of knew what I was doing at the time, and was figuring out solutions to problems that didn’t exist yet. We did an internal test at DD to prove that my methodology worked. Right now, a lot of people are starting to do that, which is basically shooting in ‘pies’ – in quadrants – and then stitching it in afterwards. So you get higher fidelity stuff. The Neymar Experience was about two-and-a-half years ago. It was one of the first times I think almost anybody started shooting in high fidelity pie slices.

And then we did a bunch of smaller pieces – fully CG stuff for Syfy in 2015, for example. My core in what I do at Digital Domain is heavy visual effects VR pieces.

Tell us a little about NBA. How did that come about, and what were the challenges of making that experience?

Early in January 2016, I did a small internal piece called Into The Storm - it’s on our Digital Domain app so you can look at it. It was a test-case scenario to show that we could put live-action people into VR environment. And it was good. And the work that we did on Storm allowed us to get the Syfy piece.

With Into The Storm I shot with a stereo rig, through a mirror – so you get the proper IPD [interpupillary distance] of a person. We shot on green screen, and we put him into a digital environment. It’s just really small, a minute long. (It's actually the model of Vin Diesel we had from Fast & the Furious! Nobody knows this. Could be anybody’s legs, but it’s his legs.) And our live-action person is outside the door, and you see this tornado come out and it whips up the car.

We showed that to a lot of internal people that came by. It’s a show piece: “Hey, we can do VR with visual effects. Come in and let’s talk.” So that was kind of how that conversation with NBA started. About the middle of the year, we went out and shot a basketball court in Oklahoma with the idea that we would use that in some sort of NBA project. But they didn’t go with the core idea. They came back and said, “We want to do something a little more intimate, a little more up close with NBA legends.” So given that directive, the content studio group came up with the idea of: “Let’s do a face-to-face interview in a really cool lounge, not on a basketball court.”

What’s sexy? What’s cool? Right now, it’s VR. VR is there. We see a lot of that happening right now for AR.

With Nike and Neymar as well as the NBA, you’re dealing with some very big brands. What’s the experience like of creating something for another person’s IP who’s going to be very protective?

For Syfy as well as for NBA and Nike, they didn’t know too much about VR. It's a marketing reason to get into VR. A lot of these brands want to reach a younger audience. In order to do that, what’s sexy? What’s cool? Right now, it’s VR. VR is there. One of the other things that coming out is AR. So that’s even bigger. We see a lot of that happening right now for AR.

But in order to sell a client on VR, or to get them interested, we have to show them certain high-calibre projects in VR, as well as educate them on what VR is. And that’s the key. So a lot of the time, if a client comes to us and they’re serious about doing work with us, we have to educate them on what’s a headset and what’s the distance between the eyes and what’s stereo and what’s monoscopic. So it’s a lot of repetitive explanation of what VR is.

And also, there’s different experiences on the phone or on a Rift or on a Vibe. Even at DD, there’s been very few people who understand al the terminologies and all the technologies involved in creating it. So it was a perfect opportunity for me to continue what I’ve been doing for so long on the technological side, and bring all the VFX knowledge that I have into this one little pocket of information.