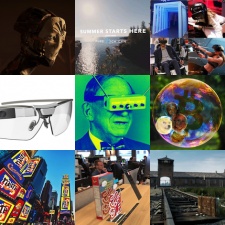 Neill Blomkamp says, ‘It’s going to be a bigger deal than VR’.

USA Today Network’s VR Ad Studio Head on working with Nielsen to measure the impact of these new ad experiences.

4) Looking To The Future Of Mixed Reality (Part III)

The third and final part of Unity’s series about MR.

5) The Unexpected Rebirth Of Google Glass

Few products in tech have drawn as much ridicule or outright laughter as Google Glass. But that wasn’t always the case...

6) Are Wearables the Next Big Thing for AR?

ArsTechnica on the crowdfunding model that we've seen adopted in the XR industry by Reality Gaming and Prosense.

8) Does A VR Auschwitz Simulation Cross An Ethical Line?

Based on the testimonies of survivors, Witness: Auschwitz creates a VR replica of the concentration camp.

Adweek looks at how M&Ms, Jaguar and Mastercard seek direct connections with consumers.