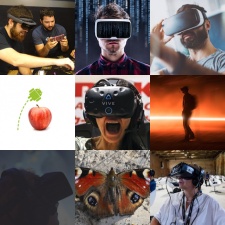 2) Looking To The Future Of Mixed Reality – Part I

A three-part series from Unity on how to reinvent and influence the future and mass adoption of immersive technologies.

3) How Is ARCore Better Than ARKit?

Google has announced ARCore, its competitor to Apple’s ARKit. Obviously this is great news for the AR industry, but what does it really mean for developers and consumers?

The lauded Mexican director speaks to Hans Ulrich Obrist about his new virtual reality project, inspired by the experiences of refugees and immigrants

5) Impact Of Virtual And Augmented Reality Technologies Comes Into Focus

Virtual Reality and Augmented Reality are poised to change the IoT world, but the technologies still have a long way to go to make a profound impact.

The oldest film festival in the world embraces a new medium

Stats based on a survey of 1,900 Internet users by Thrive Analytics.

8) Is Virtual Reality The Next 3D TV?

USA Today says, 'Like VR, it was hyped, pricey and consumers didn't care'.

9) How To Get Started With A Career In Virtual Reality