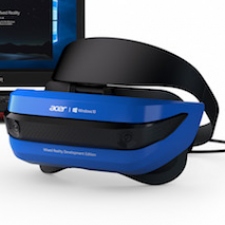 Microsoft has announced that its XBox One family of consoles will get a VR/MR headset next year. The first Windows Mixed Reality headset – Microsoft seems keen not to refer to it as VR - was shown at GDC.

The Acer hardware will cost $299 and begins shipping to developers this month as the first part of a phased rollout. Along with the HMD, developers will receive documentation, access to Windows 10 Insider preview builds, and the software development kit (SDK).

Microsoft may be leading with PC for WMR, but in a blog on the Windows website, Alex Kipman, Technical Fellow at Microsoft, said “We’re also excited to share that Windows Mixed Reality experiences will light up on other devices over time, beyond desktop and Microsoft HoloLens. Our plan is to bring mixed reality content to the Xbox One family of devices, including Project Scorpio, in 2018.”

The announcement that VR is coming to XBox is possibly the worst kept secret in VR’s fledgling history. Ever since the Redmond software giant revealed it was working on producing VR hardware with third party manufacturers – including 3Glasses, ASUS, Dell, HP, and Lenovo - the hardware specs for the forthcoming XBox Scorpio seemed like a very capable VR system.

As we reported in January, Phil Spencer, Head of XBox, said “We designed Scorpio as a VR-capable console. Whether that happens this year, next year or the year after… It’s so early, I think we’re a couple of years before we’ll really see [VR] hit mainstream.” It was always a case of ‘When?’ - not ‘Will they?’ - but now we know the new hardware will reach XBox gamers next year.

So why not wait that ‘couple of years’ for the mainstream? Has Sony’s sales success with PS VR accelerated Microsoft’s launch plans? The Japanese company recently revealed that it has sold nearly one million PS VR units in four months.

Now consumer interest has been established in the console VR sector, has Microsoft been smart and let a competitor take the risk of being first to market, or have they handed them an advantage too big to catch up?

We await the PlayStation Vs XBox playground arguments online with interest...