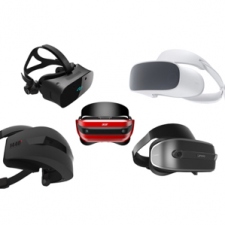 The first images of Microsoft VR headsets from third party manufacturers have been released. They show a range of form factors and wear styles, with Dell, Lenovo, HP and Acer opting for a PS VR style halo fitting system, where 3Glasses has chosen Vive style material straps.

We don’t know how much these devices will cost, other than prices start at $299. Just as consumers are familiar with in PC hardware, we expect to see a wide range of price points, based on cost of construction and functionality.