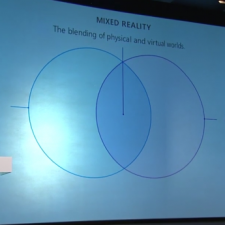 Microsoft revealed its strategy to leverage its position as operating system provider in the VR space at today’s Windows Hardware Engineering Community event (WinHEC) in Shenzhen, China. The company aims to take advantage of its OS to enable functionality and ease of use that isn’t available to competitors such as Oculus and HTC, which Microsoft describes as ‘applications’. Instead, they will offer a homogenized API surface area that is more events driven to developers, who will be able to target a single input stack allowing their apps to support a wide range of control methods. In addition to conventional controllers – including keyboard, mouse and gamepads - Microsoft also intends to support gaze, gesture and voice input at a later date.

Plays Well With Others

While Microsoft may be looking to exploit any advantage it has over VR hardware competitors such as HTC and Oculus, it has said that any headset capable of 6 degrees of freedom would be able to access apps purchased from the Microsoft store.