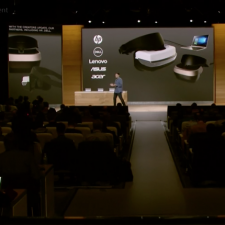 While Microsoft has only previously announced the development of its HoloLens MR headset, it used today’s Windows 10 event to announce a range of ‘affordable’ VR HMDs. Terry Myerson told us that HP, Dell, Lenovo, Asus and Acer will be shipping VR headsets, with the details that, “These headsets will be the first and only to ship with inside-out 6-degrees-of-freedom sensors. Unlike every other VR headset on the market today, this means there will be zero need for a separate room or a complicated set-up.”

Shot Across The Bows

Shot across the bows for the likes of Oculus and HTC! What about a broadside while you’re at it, Terry? “And while those other less immersive accessories today cost over $500 and most of the time requiring a new expensive device, we are announcing today that these Creator’s Update accessories will start at just $299.” Less immersive? Lower cost? Lower PC spec? Boom!

Myerson promises that, “You can turn on your laptop and immediately start scanning, printing, creating and sharing in 3D and experience Mixed Reality.”

There's no information about when these HMDs will be available, but Microsoft is back in the VR game!

You can see our full report here or watch the livestream here.