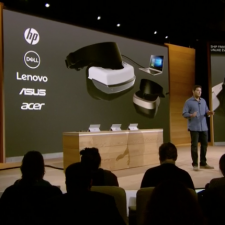 Microsoft’s Windows 10 event in New York City today unveiled a series of innovations across its divisions. The focus throughout was squarely on Windows users and empowering them to be creative, which is why the next iteration of the OS is called The Windows 10 Creator’s Update.

Early builds will be released to Windows Insiders this week and the update will ship to all Windows 10 users in the spring for free.

The computing giant is keen to explain that its new software and hardware will enable users to create, share and be more productive. Key amongst their innovations is an emphasis on the power of 3D across multiple apps in accelerating understanding. Thankfully, this isn’t Blues Brothers sunglasses and the blurry graphics of TV 3D; they’re talking about working with fully three-dimensional models in the software that many of us use every day. To prove that it isn’t just for pro 3D artists; two of the programs they demoed were... Paint and Powerpoint. No, really - we were surprised too!

Megan Saunders demonstrated how users will be able to scan any object – in the demo it was a sandcastle - and import it into Paint to edit. She said that, “We’ve shown you how we can bring objects from your physical world into your digital world.” She went on to observe, “We can take this rich 3D content and break it free from your screens with Microsoft HoloLens.”

As Taj Reid took to the stage to demo HoloLens, Saunders claimed that, “Microsoft Edge is the first browser to fully embrace 3D for everyone.” Describing it as, “A portal for digital content to enter into your real world as a hologram.” She promises that, “You can move your content seamlessly from your real world to your digital world and back again.”

As an example of the technology’s application, Reid showed a proof of concept from leading home furnishings store, Houzz that enables consumers to preview products in their own home before they buy. Reid brought two virtual stools onto the stage to show how users can, “Bring objects into our space and check them out before we make a big decision.” We’ve all known this would be pretty cool, but it was great to see it played out onstage.

Affordable VR For All

Saunders announced that, “Powerful and affordable Virtual Reality is coming to everyone.” Then she paused for applause, only to be rewarded with a single clap; the audience was probably busy shopping for stools. Unphased, she went on to explain, “We’re bringing a whole new set of affordable VR accessories to your Windows 10 PC. Now everyone can create, view and interact with 3D objects in Mixed Reality, from Augmented Reality to Virtual Reality and everything in-between.”

Reid demoed the VR hardware with a VR space of what looked like the lounge space from a Mediterranean villa. On one wall, a football match with his favourite team played out on a big screen, while his favourite apps nestled on a shelf on the opposite wall. Saunders explained that, “Because this is Windows, wherever you choose to go, you’ll always have the apps you know and love with you.”

Saunders also commented that VR will allow users not only to revisit memories such as a sandcastle, but also create new memories. To demonstrate this, Reid visited Rome’s Pantheon. Saunders expanded that while 360 videos are already widely available on the web, “Holotour takes that idea even further and allows you to explore and interact with new places. It was made for Hololens, but here it is in VR.”

As she puts it, “Content is no longer confined to a digital or physical form. It has evolved. Our digital world starts a new, more human journey.”

While Microsoft has only previously announced the development of its HoloLens MR headset, it used today’s event to announce a range of ‘affordable’ VR HMDs. Terry Myerson told us that HP, Dell, Lenovo, Asus and Acer will be shipping VR headsets, with the details that, “These headsets will be the first and only to ship with inside-out 6-degrees-of-freedom sensors. Unlike every other VR headset on the market today, this means there will be zero need for a separate room or a complicated set-up.”

Ooh – shot across the bows for the likes of Oculus and HTC! What about a broadside while you’re at it, Terry? “And while those other less immersive accessories today cost over $500 and most of the time requiring a new expensive device, we are announcing today that these Creator’s Update accessories will start at just $299.” Less immersive? Lower cost? Lower PC spec? Boom!

Myerson promises that, “You can turn on your laptop and immediately start scanning, printing, creating and sharing in 3D and experience Mixed Reality.”

There's no information about when these HMDs will be available, but doesn’t that sound cool? Microsoft is back in the VR game!