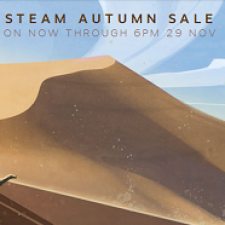 A Steam Sale discounting 277 VR supported titles is running until 6pm GMT on November 29th. The sale includes 263 titles for Vive, 116 for Rift and 95 for the newly supported OSVR headsets.

When compared to old entertainment platform launches, the incredibly fast pace of VR’s initial release into the mainstream becomes clear. For example, 1985 saw the US launch of the Famicom/Nintendo Entertainment System with only 17 titles; at the end of 2016 - VR’s ‘launch’ year - we have nearly 300 VR titles being discounted at the same time by one online gaming platform.

The sale ends soon and includes some of the most popular and successful VR titles. Google’s award-winning Tilt Brush, Raw Data (used at Meltdown’s first Vive Night), Windlands (Director & Producer Jon Hibbins featured in an interview with us) and Viking VR’s Space Jones are all up for grabs at a discounted price.