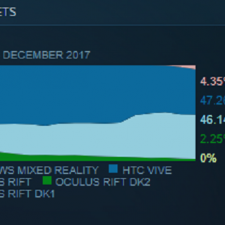 The Oculus Rift is the biggest VR headset on Steam, according to December’s hardware survey. This is the first time that Oculus has taken the lead from HTC’s Vive. The usage stats show Oculus with a combined total of 48.39% for its consumer Rift hardware and DK2, with Vive just over 1% behind on 47.26%.

Microsoft’s Windows Mixed Reality hardware has shown growth of 4.35% since its release in October, taking market share from both Rift and Vive. The Vive has been more affected, down 2.2% from its high of 49.5%, with the Rift down 1.6%. This change has been enough to put Rift ahead of Vive after months of Oculus’ hardware closing the gap.

Rift is also now the most popular VR headset on Steam by a margin of 0.17% in the optional user survey.