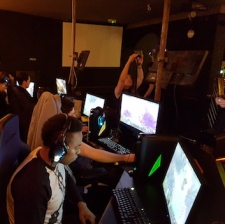 Last night saw HTC kick off a series of Vive Nights at the eSports Meltdown bars in London, Paris and Cologne to show off the VR headset to dozens of gamers.

The Virtual Report was in attendance at the London bar, where players battled it out against rogue robots in Survios’ co-op robot shooter Raw Data. The immersive game lets players wield dual pistols to blow their enemies away or cut robots down to size with their trusty sword. Users both new and experienced in Vive teamed up together to get the highest scores – which The Virtual Report accidentally (naturally) topped at one stage.

The biggest takeaway from the event was not just the possibilities for VR in eSports and multiplayer gaming, but for VR’s social potential, an oft-criticised element of the experience. It’s easy to see how, provided safeguards are put in place – having drunken people using a headset and being around VR users will never be a good idea - VR can be used as an enjoyable entertainment experience in bars and other locations across the country.

It’s obviously a great way to get people to learn about and adopt the tech and for some, the Vive Night appeared to be their first hands-on with virtual reality and the Vive. But the event showed that VR can be a great way to meet new people, whether it’s by teaming up with them in a co-op title like Raw Data's new multiplayer mode and working together to rack up a high score, getting into the competitive spirit of the leaderboard with others, or just discussing the experience with strangers.

The whole VR experience added to, rather than took away from, the fun and social aspect of a night out. It offers a focal point to bring people together as well as an entertaining activity to participate in. And of course, watching people excel at - or be completely clueless about - what they’re doing is also fun.