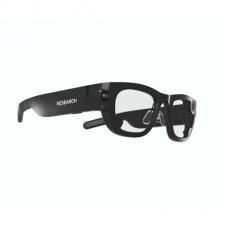 Documentation recently published by The Federal Communications Commission (FCC) offers a better understanding of Facebook's Project Aria augmented reality glasses. Including the fact they are now referred to as the Gemini EVT headset.

Where EVT stands for Engineering Valuation Test - a familiar term for test kit in hardware development - if there was any doubt, the user manual makes it clear that the hardware is not intended for the public saying, 'Non-consumer use only. The Glasses are intended for limited distribution only for purposes of testing and data collection and are for use by the authorized user only. As prototype equipment...' It goes on to clarify that, 'The Gemini EVT headset is only to be used by FTEs (Full Time Employees) and contingent workers for research and engineering purposes only.'

The documentation offers an insight into the work that Facebook is putting in to develop the AR glasses of the future. This test kit is designed to gather information, rather than serve it to the user, as it lacks a visual display.

The Qualcomm-powered hardware runs on a custom Android Operating System and features physical buttons to control features such as power, image and microphone capture. We've learned that the frames can capture both still images as well as video, while both camera and microphone can be disabled by the user, who can see the status by an inward-facing LED. With privacy concerns front of mind, an outward-facing status light also advises everyone else if the Gemini is capturing data.

Glasses wearers will be pleased to hear that the Gemini has been designed to accept prescription lenses, even as test hardware, indicating that this will be a consideration for future consumer models.

The glasses are equipped with multiple cameras - Protocol counts four, but we can only see three - capable of recording both photos and videos. That same article also speculates that the camera sensors are the same as used in Oculus Quest 2, which makes sense, as it would help keep development costs down.

While a single camera could be used as a data source for relatively light augmented apps, multiple will enable Simultaneous Localization And Mapping (SLAM), which is essential for more complex and 6-Degrees-of-Freedom experiences. This is how Facebook has provided inside-out tracking for its hugely successful Quest series of standalone VR headsets and what we all want to see from 'true' AR glasses.

What's in a name?

'Gemini' means 'twins' in Latin, which we guess is a reference to the fact that the glasses work in tandem with an iOS companion app named Ariane, which means 'most holy' in Greek. We're not quite sure what to make of that name.

If you're disappointed Gemini doesn't sound all that different to Snap's Spectacles, then bear in mind that this documentation was first submitted a year ago and Facebook has doubtless made big strides in the subsequent 12 months. This model is a test platform for the forthcoming consumer smartglasses in partnership with Ray Ban, release date unknown.