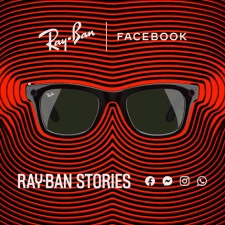 We've been looking forward to our first look at the augmented reality (AR) glasses from Facebook, developed in partnership with Ray-Ban for some time. Today, they were revealed in a global video to audiences everywhere. Mark Zuckerberg, founder and CEO at Facebook said, "Glasses are going to be an important part of building the next computing platform and unlocking a whole new set of experiences for people".

Called Ray Ban Stories, the glasses are pretty much what we expected - cameras, mic and speakers with wireless connectivity, but no video display capability. Zuckerberg pointed out they're, "An important step towards a future when phones are no longer a central part of our lives - and you won't have to choose between interacting with your device or the world around you."

We'll have to wait a while longer to be playing AR games or navigating to a meeting following arrows in front of our eyes, but Zuck reminded us that Facebook is still committed to, "Developing the ultimate augmented reality glasses".

If we were in any doubt before, Stories have definitely been designed with mobiles in mind.

First and foremost, the Ray-Ban Stories are about image capture - and more specifically the ability to, "Capture and share experiences from your point of view". The cameras can be activated by a push button in the arm, or with Facebook Assistant and voice control built-in, users can say, 'Hey Facebook, take a video' for hands-free operation. The camera automatically adjusts to the light around you for high-quality captures.

The frames feature dual 5MP cameras for photo and video at 2592 x 1944 pixels and 1184 x 1184 pixels at 30 frames per second respectively. Capturing either 4:3 ratio like an old-skool TV, or just plain square for video, seems a bit of an odd choice when the world has gone widescreen, but the videos were all presented in portrait format. No doubt the images from each camera are stitched together to fit a cellphone screen. If we were in any doubt before, Stories have definitely been designed with mobiles in mind.

The glasses can store 30 videos of 30-second duration or 500 photos - all encrypted - for you to share on Facebook WhatsApp or Instagram, or save to your phone's camera roll, all using the Facebook View app. Unsurprisingly, there was no mention of social media sites outside of the FB family.

Obviously mindful of the public pushback to Google's ill-fated Glasses way back in 2013, Facebook states the Stories have been, 'Designed with privacy in mind'. An external front-facing capture LED signals to others when you’re taking a photo or video, which Zuck was keen to point out is, "More than what smartphones do". And if you hit that off switch, it completely cuts the three-mic array and both cameras.

As well as image capture, two discrete micro speakers provide audio playback so you can listen to music or your podcast of choice with connectivity via WiFi 802.11 Ac, 2.45/5 Ghz and Bluetooth 5.0. That's not going to be at all annoying for anyone around you on extended listening sessions...

We're more interested in the fact that those speakers will also work in combination with the mics to allow you to take calls from your mobile. The Stories are compatible with Apple devices running iOS 13 and up, as well as Android smartphones from v8.1.

A storage case is included, which also doubles as a charger when away from home, but there was no mention of battery life or how many charges the case can provide.

The Stories were developed in partnership with Essilor Luxottica, whose chief wearables officer Rocco Basilico said that, "Smartglasses let more people live in the moment". Basilico revealed that Stories will be available in more than 20 styles, with three different frames - including iconic styles such as the classic Wayfarer as well as Meteor or Round - four colours and six types of lenses that can be made to your prescription.

All lenses filter UV rays and blue light and you can even add Transitions to adapt to changing light conditions, from day to night. The cameras, speakers and microphones add just 5g extra weight to the Wayfarers.

The Wayfarers also make for another interesting point of comparison; price. The normal sunglasses cost £137. With the Stories selling for £299, consumers are effectively paying £162 for two cameras, three mics, a pair of speakers, WiFi and Bluetooth. That doesn't seem like a bad deal.

There's a lot of technology that still needs to be developed - and miniaturised - to deliver the AR glasses that we all envision for the future.

Ray-Ban's Stories certainly clear the first obstacle for any smartglasses - they don't look dorky. In fact, they look pretty much as cool as any pair of sunglasses. 10/10 would wear.

As for functionality? We're not quite so convinced. As we've already mentioned, Google Glass failed hard back in 2013 and Snap's Spectacles haven't exactly taken off since 2016, despite funky colours and a guerilla marketing campaign. Three-quarters of the way through 2021, Facebook's late to the market without any real added AR that we can see. Are we surprised? No. Disappointed, yes.

But this hardware release was only ever intended to be the first step on the long road to augmented reality. As Zuckerberg himself admitted, "There's a lot of technology that still needs to be developed - and miniaturised - to deliver the AR glasses that we all envision for the future".

And until that day comes, we could get used to having a cool new way to share, 'Your stories, your way'...

Ray Ban Stories are available today from $299 in select countries, with more to follow.