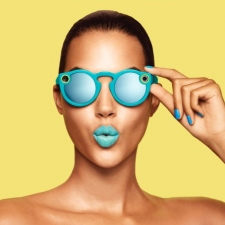 Snap Inc has released new hardware designed to pair with its highly successful social messaging app, Snapchat. The Spectacles feature a camera embedded into the frame of a pair of coloured sunglasses. Each tap records a ten second video, which is saved into the Memories section of the user’s Snapchat account. Video is recorded in a circular format, adding another wrinkle to the age-old battle for supremacy between landscape and portrait video formats.

These Spectacles are being released across America as part of a PR stunt and are only available from a Snapbot vending machine. This makes it tricky to get hold of the sought-after glasses, as not only do the Snapbots appear at random locations across America, but queues can last several hours. A Snapbot appeared today at 6AM right next to Central Park, New York.

Interactive AR is not a new feature to Snapchat, ever since the acquisition of Looksery which introduced lenses that could scan a user’s face and add elements to the scene. Snapbot shows the user how each different colour Spectacles will appear on their face before the user buys one. This feature allows the user to virtually ‘try before they buy’.

Twitter user Nick Dio (@NickDiodato) says that the ability to tap the Spectacles to record a video, “Makes it so much easier to share with people, and not as distruptive.”

With samples in demand by the public, it seems that Snap has overcome the consumer resistance to privacy concerns that plagued Google’s ill-fated Glass in 2014. It can’t hurt to point out that they look a lot better...