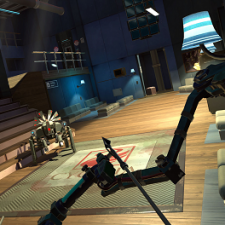 An action adventure game built exclusively for Virtual Reality, Apex Construct is set in a shattered future where merciless robots prowl the world as a result of mankind’s reckless experiments. Equipped with an upgradable bow and arrow, players will explore this world to uncover its secrets while defending themselves from the nightmare machines that dominate the world of tomorrow.

“Immersion in Virtual Reality isn’t just about realistic motions and movements - it’s also about how believable the world you’ve stepped into becomes and how much you can interact with it. That’s why we’ve focused so much on world building in Apex Construct,” said Oskar Burman, CEO and co-founder of Fast Travel Games (and Focal Point panellist).

“Between frantic moments of action that pit you against perilous robots, players will have the opportunity to explore the environment and engage in their surroundings, solving puzzles that help to further their understanding of this fractured future world and its history.”

As the last human alive in this dystopian future, players will need to use both their wits and combat skills if they want to survive. The puzzles that players encounter will reveal more of the story, told in a world where two powerful AIs are locked in a drawn-out conflict. Using motion controllers, players will pick up a bow, firing arrows through a fluid, natural motion that simulates the mechanics of real world archery to destroy robots and overcome environmental challenges. Some arrows even offer quite the punch, dealing electrical or explosive damage when they pierce their target.

The Right Tools For The Right Job

“Coming from the world of AAA action games, one of the cardinal rules we’ve always followed is to give our players the right tools for the right job. In Virtual Reality, few weapons feel as tactile and immersive as a bow and arrow, which made it a natural fit for our first VR experience,” said Erik Odelhdahl, lead designer on Apex Construct. “Attaining a true sense of immersion requires motions that feel natural to a player. We’ve made sure to do this in every moment of Apex Construct, whether that’s pulling back on a bow, throwing a grenade, or rummaging through old buildings.”

Founded in 2016, Fast Travel Games have recently closed a $2.1 million Series A funding round to support the launch of Apex Construct, bringing their total funding to date to $2.9 million. The company’s founders come from a diverse background of major industry players including Rovio, DICE and EA, and they have since hired talent with extensive experience at additional notable games companies like Bandai Namco and Guerilla Games.

Apex Construct will be available first on PlayStation VR, with releases on HTC Vive, Oculus Rift and Microsoft Mixed Reality Headsets to follow.