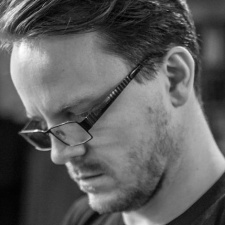 Fast Travel Games’ first title was revealed at the recent PlayStation Media Showcase at Paris Games Week. Apex Construct is a first-person exploration, puzzle-solving and combat VR game with a focus on bow and arrow gameplay.

Being featured on the PlayStation Showcase is pretty cool; how did that come about?

Erik Odeldahl (EO): Sony’s been really interested in the game since we started talking with them and eventually we came to an agreement. We love working with Sony; they're great people.

Andreas Juliusson (AJ): And timing is right now for us as well, because the game is getting close to final, so this was the time we wanted to announce the game. Coming to Paris Games Week and making a big thing by announcing six or seven other new titles, that was a great sync in the timing for us as well.

It's not a short demo experience, a gimmicky adaptation of a non-VR title; this is a true action-adventure.

AJ: The reaction has been overwhelmingly positive from VR communities, PlayStation VR communities, with the Sony segment. The trailer we announced the game with tells what the game is really about. It shows that this is a proper action-adventure for VR. It's not a short demo kind of experience, it's not a gimmicky adaptation of a non-VR title; this is a true action-adventure that brings depth and comprehensive experience with bow and shield mechanics, and you have exploration, and you have inventory management.

The sentiment says this might actually be a big thing for VR gaming, so we are very - I wouldn't say 'surprised' because we believe in our title - but I think we are a bit overwhelmed by the massive positive reception we have gotten so far.

Why did you lead with a PS VR release?

EO: We really like the PS VR and Sony has always been a company that focuses on games. People that own PS VR, they really want good VR games. That said, we're releasing on all the other big platforms shortly after and I think we've built a game that builds on the strengths of each platform.

AJ: We're also releasing it for Windows Mixed Reality (MR), which is sort of a new segment for VR gaming. Up until a few weeks ago, there were HTC Vive and Oculus Rift, but now there's also Windows. So PC VR gaming will be a big thing for Apex Construct as well.

Finding the strengths and weaknesses for each platform is part of the fun of building a game - and it's a part of what makes Apex Construct the game it is.

How does development differ across platforms and different controllers?

EO: We all have long backgrounds in triple-A gaming from companies such as Dice, Avalanche, and Rovio, so we're used to doing multiplatform stuff. When we started working on Apex Construct, there was never ever any question about whether we would support just one platform; we were gonna build for all of them.

Finding the strengths and weaknesses for each platform is interesting. Finding challenges that we have to solve is part of the fun of building a game. We also want the game to be roughly equal on all platforms. Coming up with the best designs for each situation is challenging and it's fun - and it's a part of what makes Apex Construct the game it is.

Why use the teleportation mechanic for locomotion?

EO: We wanted Apex Construct to be playable by everybody with a VR headset and teleportation is a great way to move around. However, we didn't want to confine the player to specific points in a level, so you can choose where to teleport to in exactly.

It is partly to make it more accessible, but also to adapt to motion sickness. Some people are sensitive and some aren't sensitive at all, but we wanted to build the game that everybody could play and enjoy.

We are looking at other locomotion alternatives, as well. Full locomotion, different types of teleportation; we've tried everything. We believe the teleportation mechanic is the best one, but we’ll listen to feedback and see where we end up.

Never move the camera without the player instigating it. The player is always in full control; that's the most vital thing.

What are the means you've found of curbing motion sickness?

EO: We never move the camera without the player instigating it; whether it's teleportation, pressing a button to use an elevator, stuff like that. The player is always in full control of their position and their camera; I think that's the most vital thing.
We're testing it and letting lots of people play the game and track to see how they feel. But we haven't had to do any super fancy tricks with this game.

The game is a story-driven, single-player experience; how does that change the way you approach development, as opposed to, say, a wave shooter?

EO: We felt that the market and ourselves, we were ready for something else than wave shooters. There are some great wave shooters out there, but a big part of playing VR games - putting on and wearing that headset - is about immersing yourself in different worlds, and being able to explore them and move around freely in them. Not being able to move around freely in such a fantastic world as we're building with Apex Construct would feel like a very weird thing to do.

VR is still early and everybody wants to help everybody else. VR is a very sharing community and if we figure something out, we talk to people about it.

How's the VR industry in Sweden?

EO: There's actually quite a few smaller companies. We're not super big, there are 12 of us right now in the studio, but there's lots of smaller studios doing some really cool things; not just for games, but also for advertising and TV and news and stuff like that. There's actually a great scene, especially in Stockholm, which is the one we're a part of.

AJ: At some universities, we have students trying to develop new technologies for VR, so it's widespread. Interest is high. We have some dedicated Swedish personalities on YouTube who dedicate their life to all things VR. It's pretty cool.

EO: VR is it's still early and everybody wants to help everybody else. It's not, having worked in triple-A gaming for such a long time, where everything is so super-hush-hush and secret and nobody ever says anything except on the occasional GDC (Games Developer Conference) presentation. VR is a very sharing community and if we figure something out, we talk to people about it - and they do the same.

What does CCP pulling out of VR say about the VR market?

EO: First of all, I feel really sorry for the people working in the studios. I really like Eve: Valkyrie especially; I think it's a really cool game.

VR is fairly new. The amount of headsets sold to customers and players, it's steadily increasing and it will keep on increasing and eventually, it will explode. But we look at the market the way it is now and balance our budgets based on the amount of people actually playing now.

Great games can help drive the VR business and, as a developer, you can help the market, but you can't do it alone.

So is it a case of just expecting a reasonable return on investment, rather than spending $20b making a fantasy game that three people are going to buy?

AJ: Great games can help drive the VR business, but we're also a bit in the hands of the technology itself, which keeps on getting improvements, but is still a few years away from being super high-end.

The VR market is improving and, as a developer, you can help the market get to where it needs to be, but you can't do it alone. Bigger companies that are more used to releasing triple-A non-VR titles enter the VR industry from a different level.

Our next game will look at what the VR market is when that game is gonna be released and make a game for that market. So that probably means that we will scale up, development-wise, as the market does and as we - together with the PC headset manufacturers or Sony - keep improving on the technology and making it more user-friendly.

We can be profitable at numbers that a triple-A studio wouldn't even think about. We don't have to sell 20m copies for this to be a success.

How many copies would you have to sell to be profitable?

EO: We can be profitable at numbers that a triple-A studio wouldn't even think about. We have a healthy budget on this game - and we'll have a healthy budget on our next game, as well. It's really important that we build quality stuff and not skimp on quality; we spend what we have to spend to make the game great. We don't have to sell 20m copies for this to be a success.

AJ: We’re in a position now where VR sold this many headsets, so we know this is the ceiling of our expected or potential sales. Should we have 100 per cent attach rate, so everyone with a headset on PC or PlayStation buys our game, this is the amount of units we can sell. So what's a reasonable attach rate?

That's what we look at and then we try to say, 'Okay, do we actually need to spend any marketing money, or is creating one of the best VR games enough? Is the VR audience so invested and hungry for this kind of experience that they will take it to their hearts, without us having to buy a TV commercial?'

I've been in the industry for over 10 years, doing marketing and PR in gaming and I love this situation. I can't just buy my way to success; we need to be genuine and true to what VR gamers want. We need to talk to them and we need to deliver a game that they actually want because if we don't, there's no marketing in the world that will convince the VR audience that this is a good thing; they will see that themselves.