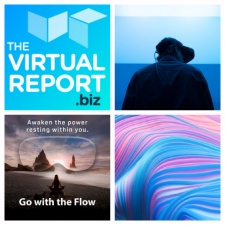 With three VR headset reveals expected from the leading brands in the next three weeks, this could be the biggest month ever for virtual reality. You might want to hold off investing in a new HMD until the dust has settled...

Taiwanese hardware company HTC Vive is first out of the gates this week at 08:00 PDT/15:00 GMT on October 14th. HTC has been teasing this event with a series of images, as we reported last month. All using the hashtag #gowiththeflow, most of the images centre on what we can only presume is a carrying case, but the latest Tweet by none other than Alvin Wang Grayling, HTC China president, features the outline of what we can only presume to be some kind of VR headset.

You can register for the event - viewable in VR - here.

Next up is a truly tantalising proposition from Finnish enterprise firm, Varjo who promise that, "This is the one you've been waiting for". The company is renowned for its high-end human-eye resolution headsets for business use and we're excited to see what they reveal in the live event on October 21st, starting at 12:00 ET/17:00 GMT.

You can register for the event here.

The only one of the three brands yet to confirm a hardware reveal, Facebook's annual developer mini-conference, Facebook Connect, is coming up on October 28th, as we reported this summer.

It's become tradition for the Californian company to reveal new hardware at the event and we hope we won't be disappointed this year. Rumours are rife that we can expect to see the long-mooted Quest 2 Pro, which may - or may not - feature a higher resolution plus face and eye-tracking.

You can register for the event here.

We'll bring you the latest updates as they happen...