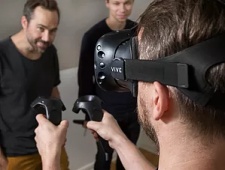 Fast Travel Games, the VR games studio founded by industry veterans from Rovio, EA and DICE, today announced it has raised a $2.1 million (USD) series A funding round. The round was led by Industrifonden, one of the most active and largest venture capital firms in the Nordics, with participation from Creades, Inbox Capital and existing investor, Sunstone Capital.

With this latest infusion of capital, the company’s total funding comes to $2.9 million (USD), which will primarily be used to launch their first game and expand the team. Coming soon, the action-adventure game is led by Mirror’s Edge Catalyst design director and Fast Travel Games co-founder Erik Odeldahl and will be available on all major VR headsets.

“While still in its infancy, Virtual Reality is becoming a platform where consumers can play and engage with games like never before,” said Oskar Burman, Fast Travel Games’ CEO and co-founder / ex-head of studio of Rovio Stockholm. “We are excited to have these prominent Nordic investors by our side as we strengthen our team and expand upon our ability to bring these experiences to life for players.”

Beyond completing and launching its first title, Fast Travel Games will also use the latest funding to accelerate the growth of its team, allowing the studio to simultaneously begin pre-production of its next game. The studio plans to double in size in the year ahead and, since launch, has steadily grown its team with additional industry veterans who bring extensive experience from companies including EA, DICE, Guerilla Games, Rovio and Avalanche Studios.

“The gaming industry has been under served by venture capital looking from a return on investment perspective. We see huge opportunity in VR moving to mass market and ubiquity. Combine these two factors with a stellar team and you have something that’s a very attractive investment,” said John Sjölander, Investment Manager at Industrifonden. “With Fast Travel Games’ deep-rooted expertise and track record within the games industry, and with really good co-investors, we’re very excited for this investment.”