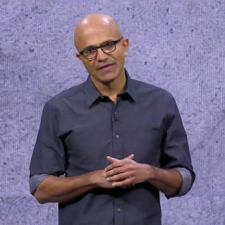 In an interesting – and telling – difference to Apple’s Special Event earlier this month, where AR was demonstrated with a consumer gaming demo, Microsoft’s Ignite keynote put the emphasis squarely on enterprise applications for Windows Mixed Reality.

Having visited Ford in Detroit, he saw first-hand how multiple departments such as manufacturing, design, engineering and sales go through the process of introducing a new model.

Nadella’s ambition is to bring together, “HoloLens and Oasis [Microsoft’s development codename for WMR] headsets, all being used as part of Microsoft 365 to bring Teams and MR together to change the frontier of collaboration”.

The live demo was led by Rachel Card, Principal Program Manager, Analog R&D, in an onstage design studio. At its centre was an ordinary-looking 2014 Ford Fusion, surrounded by blank storyboards.

Shown to the audience through Spectator mode, after Card dons a HoloLens and logs in via her phone, suddenly the storyboards show work-in-progress graphics and the car itself sports a new nose section. This allows Ford’s design teams to create and iterate more quickly and securely, as they can review multiple design options in real-time, instead of taking days to fabricate and mount physical parts.

Card also demonstrated how Microsoft Teams enables users to place a ‘digital voice note’ in 3D space for review later; it can also be read as a text note. These notes can be shared via a call with remote teams who can see the same shared experience across HoloLens and WMR to accelerate workflow. Teams also saves a transcription of the meeting.

Amjadi closed by saying that Microsoft 365 and Mixed Reality aims to create a more modern workplace. She explained that it can, “Bring together - in real-time - the entire spectrum of Mixed Reality, simple (!) Augmented Reality, Virtual Reality, and even holograms into a real, wholly immersive work environment”.

Returning to the stage, Nadella remarked, “It’s awesome to see this new medium of Mixed Reality come to life”. His closing remark on MR goes some way to explaining Microsoft’s decision not to manufacture its own WMR headsets, but to work with third parties as he says, “It’s not about any one device in its capability; it’s about the rich cloud service”.

And that’s where Microsoft has a clear market advantage over the competition.