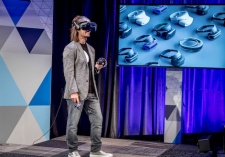 Yesterday, Alex Kipman, Technical Fellow at Microsoft, delivered a presentation at the Microsoft Reactor Space in San Francisco where he outlined the company’s vision for Windows Mixed Reality and what consumers can expect when the first hardware goes on sale in two weeks.

Kipman opened with an evangelical manifesto for Mixed Reality, promising that it will usher in a new era of computing that he described as revolutionary.

Touching on philosophy briefly, he proclaimed that, “Computers will empower us to renegotiate our very contract with reality”, going on to reiterate the point by saying, “Our very sense of reality is set to be transformed”.

Kipman’s conceit was that MR will give us, “The ability to transcend time, space and devices. We’ll immerse ourselves in virtual worlds of our choosing and be able to accomplish impossible things”.

The technical fellow has broad ambitions for WMR saying, “Mixed reality will unleash the creativity of every person and every organisation on the planet” And that it, “Will change the way we communicate, work and play”.

And what of Microsoft’s place in this future? “We are the only company to have embraced the entire continuum for Mixed Reality”, said Kipman explaining this spans, “From Augmented Reality to Virtual Reality – and everywhere in-between”.

The revolution will start with PCs, phones, opaque headsets, see-through headsets and ultimately, “In the future, headsets that can do both”.

Yesterday’s special event was to give a better understanding of, “The next wave of Windows Mixed Reality Devices, immersive Virtual Reality headsets and motion controllers”. That’s right; despite Microsoft insisting that we call its new hardware Mixed Reality, it seems it’s OK to refer to them as VR after all.

Kipman reminded us that Windows 10 was made from the ground up to natively support Mixed Reality so that it will deliver, “An experience not available on anybody else’s platform or anybody else’s device”.

Microsoft, he said, has crafted an entirely new reality for Windows; “We didn’t want to just build a new operating system. We wanted to build a deeply human way of operating”.

Kipman portrayed WMR as, “The first spatial operating system”, explaining that it’s been designed, “To leverage our instinctual ability to navigate the world around us”. As he put it, “Space is the ultimate interface”.

With WMR, when you fire up your computer, your next desktop will be a 3-dimensional home that you can decorate with art and apps alike. This spatial OS is intended to be, “A place where every piece of content has context”. The first iteration is called The Cliff House, but more locations will be available.

A compelling case for the Windows ecosystem, Kipman checked the weather in WMR using the same app that can also be used on PC, HoloLens, Xbox and tablet. With more than 20,000 apps in the library – including Cortana, as demonstrated onstage – that’s a lot of content from day one.

Adding to this, the Windows Mixed Reality Steam VR Preview will be available later this year.

Speaking of Xbox, one burning question is whether Microsoft’s games console will support WMR, having seemingly walked back its pledge to offer ‘High fidelity VR’ as ‘The next step change for gamers’.

While we’re still waiting for the news that the forthcoming Xbox One X will take advantage of WMR directly, Kipman used the recently released Cuphead to demonstrate streaming Xbox games to play on a 300-inch screen in WMR, via a Windows PC.

Microsoft also used the special event for what Kipman called, “The first ever acquisition to be announced entirely from within Virtual Reality”, with the news that it has acquired social VR service, AltspaceVR. You can read more on that in our previous article.

A neat feature of the Cliff House is the ability to place convincing pre-recorded ‘holograms’ of people. That’s how Bonnie Ross, head of 343 Studios, introduced Halo Recruit, describing it as, “A fun, brief introduction to the world of Halo in WMR for the very first time”.

Although nothing was shown of the title, we know this to be an ‘experience’ rather than a full Halo VR game. Ross said it’s, “Only scratching the surface of what the potential of a Halo MR experience could be”.

Coinciding with the WMR hardware release date, Halo Recruit will be available on 17th October.

Kipman finally confirmed that Samsung’s next VR headset will be a ‘premium’ WMR headset, available on 6th November for $499, including motion controllers. You can read more information about this in our previous article.

All Windows Mixed Reality headsets coming ‘this holiday’ are available to pre-order now.