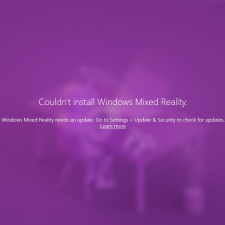 Microsoft released its new Windows 11 OS this week, with many consumers finding it a painless transition featuring some welcome updates to the appearance.

But of course it's not all plain sailing. AMD has reported that some users could experience performance hits until a patch is released. We're also hearing from some Windows Mixed Reality users that it's left their headsets temporarily inoperable.

In a Reddit thread started by LittleMonsterMine (image credit), they speak of their difficulties trying to use an HP Reverb G2 with the new software. Some users claim the install order Windows 10 to 11 then WMR to be important, but others disagree on the preferred order or even suggest running admin command prompts as the fix.

We've asked for an official explanation or information about a fix, but Microsoft has not come back to us with a response yet. We'll update this article if they do.