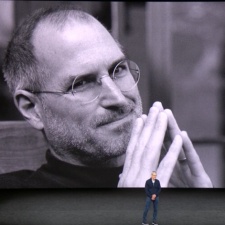 Following a tribute to the much-missed Steve Jobs, and after updates on the company's move to Apple Park, retail stores - now called Town Squares (really?) - Apple Watch, Apple TV and the new iPhone 8 and 8+, we waited more than an hour for the first mention of AR at Apple’s Special Event today.

But when it came, we learned that AR benefits from iPhone 8’s new gyroscopes and accelerometers – announced today - as well as the A11, so-called ‘Bionic’ chip (we don’t believe there’s actually any biology involved).

Three new smartphones were announced at the event; the iPhone 8 and the customary iPhone 8+, as well as the iPhone X (which is pronounced as iPhone Ten, FYI). What happened to nine? Who knows!

With regard to AR and the new iPhone hardware, we're told the new CPU handles world tracking, the GPU does the graphics – duhr! – while the new 12MP camera’s Image Signal Processor takes care of realtime lighting estimation.

To demonstrate the potential of AR, we briefly saw Warhammer 40,000: Freeblade from Pixel Toys; an example of how users could access real-time stats for MLB games; and the Sky Guide star map that plots astrological points of interest based on the user’s location and orientation.

Most interestingly, we were treated to a great demo from Atli Mar, CEO and Co-Founder at Directive Games who showed their game on stage, called The Machines.

It’s a real-time multiplayer sci-fi game that pitches rebels against 'The Dominators'. Mar pledged that players would, "Experience games in an entirely new way". He said that AR content has to be “incredibly detailed”, with a combination of ARKit and Metal 2 delivering 1.2m polygons.

An interesting innovation in the game is that the AR uses the player’s real world position to tactical advantage, so you can zoom into the action just by moving closer. As Mar observed, navigating around the play area will be, “Easier than pinch and zoom” using AR technology.

And the benefits of AR for gaming don’t end with the visuals, as The Machines takes advantage of the iPhone 8’s new stereo speaker to offer spatial audio. For example, as the player moves nearer to the action, it becomes louder. Or if a solid object comes between the player and the action, the sound becomes occluded. It all sounds very immersive and finally a compelling argument for mobile gaming over console or PC.

And some time later in the presentation, Apple reminded us that it represents the biggest platform for AR. We don't dispute that fact, but we await Google’s answer with interest...