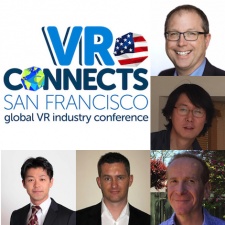 With new technology come new business opportunities and if you’re wondering how you can make the most of VR, AR and MR, then you should pay close attention to the VR Business conference track at VR Connects San Francisco, which takes place on 27th and 28th June.

From world-leading investors discussing what it takes to get that initial cash injection, all the way through to how to best monetise your finished project, our VR Business track has all the latest hints and tips guaranteed to put you ahead of the curve.

Here are just some of the highlights:

One of the best ways of staying ahead of the curve is by understanding just exactly how we got to where we are and what the current state of play is. Luckily for you, this is exactly how we’re opening VR Connects with Digi-Capital's Tim Merel and his talk, How Mobile AR Could Drive AR/VR To Over 1 Billion Users And $108B Revenue By 2021, He'll deep-dive into why he believes that the AR/VR inflection point is now within sight, whilst also looking the winners and losers, alongside how creators can best take advantage of this growing market.

Talking of new opportunities, one of the biggest monetisation methods in the mobile gaming sector in recent history has clearly been the use of in-app advertising.But not many developers seem to be considering this lucrative option when thinking about how best to make money from VR. Thankfully though, at VR Connects, Mark Castle from VRtize will taking to the stage to discuss how developers can take advantage of advertisements in VR without breaking the player’s immersion.

Many developers will prefer to stick to the more traditional route of fundraising. Right now, there's a lot of money being invested into VR, but with more and more studios competing for that all important cash injection, what's the best way to make yourself stand out? This is exactly what Jikhan Jung from Subdream Games will be discussing as he runs the audience through the best practices for fundraising in VR from the perspective of someone who has secured over $1M in investment already.

Jikhan will then later be joined by the likes of investor Daeki Lee from Translink Capital, Masaru Ohnogi from Gumi, and a representative from The Venture Reality Fund for a lively panel discussion about all things investment and fundraising in VR, AR and MR. What’s more, this will all be moderated by CloudGate Studio Co-Founder and chairman Mike Fischer, a man who has worked and advised for some of the biggest names in the world of gaming and VR.

Finally, we also have talks from the likes of Daniel Burwen of Robot Sea Monster, and Tipatat Chennavasin from The Venture Reality Fund rounding off a track that promises to be one of the highlights of the show.

Of course, VR Business is just one of the tracks at VR Connects San Francisco, and just like the other tracks we've introduced, this is only one piece of the puzzle that makes up the 30+ strong track list. In fact, if you haven't already, then definteily make sure to check out our other track reveals, inclding our star-studded Superstar Sessions, that include the likes of Unity, HTC and Digital Domain.