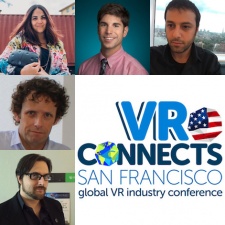 There’s nothing hotter than VR, MR and AR right now and developers worldwide are looking for the best tips, tricks and advice in order to make their way into this exciting market. So, what better way to get yourself up to speed than by checking out the VR University track at this year’s VR Connects San Francisco?

VR University brings together a range of creators and experts from the field of VR development, all in order to pass on some of their wisdom. From VR performance optimisation, to lessons in AR immersion, and even looking at why you should translate your game, there’s a range of topics that definitely cater to all needs.

Here are some of the highlights from this bumper edition VR University track:

Making VR, AR And MR Accessible For All

Keynote: VR For Everyone - Daydream and Google Play Games

We’re starting the VR University track with one of the biggest players currently in the VR space, Google. In this talk atendees can expect to learn about how Google Play is adapting its store management approach to programming the launch portfolio of games for Daydream. All with the goal of moving VR from a novelty to a mainstream movement.

From The Basics To The In-Depth

Aside from our blockbuster keynote, other highlights include Global VR Challenge winner and Broken Window Studios founder, Tristan Moore. In his talk entitled Performance Optimization For VR: How Not To Go Bust Getting Great Visuals, Tristan will be using some practical examples in order to look at how developers can best surpass developmental hurdles and ultimately build a game that runs smoothly in VR.

Another highlight, comes thanks to Deniz Opal from Hologram. In his talk entitled Don't Wait For 2020 - Turn Your VR Idea Into A Viable Proposition Right Now, Deniz will be talking about how developers can best take control of their delivery pipeline, and catapult their development to the front of the pack.

Finally, for those of you just starting out in the field of VR and AR development, we’ve also got you covered too. You see, not only do with Faviana Vangelius from SVRVIVE Studios discussing the lessons her team learned from moving into the world of VR development, but we also have Andy Wilton from Climax Studios New Zealand discussing the lessons they have learned from working in AR; especially those concerning presence and immersion.

That’s Not All Though

What’s more though, whilst VR University may contain the most sessions of any conference track at this year’s VR Connects San Francisco, there’s still a lot more to reveal, including discussions in monetisation and business, and a look at where the industry may be heading, amongst many other things.

In fact we’ve already revealed our Superstar Sessions which include the likes of Unity, HTC and Digital Domain, alongside the details of our Future Visions track, with more reveals to come very soon right here on The Virtual Report.