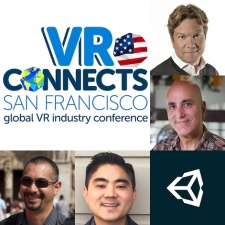 With some six weeks to go until VR Connects San Francisco on 27th to 28th June, it's content focus time.

The schedule, focused on Day 2 of the conference, packs in 30+ mighty sessions tighter than tourists on a San Francisco cable car to deliver an agenda that covers all core aspects of the VR, AR, and MR scene.

Since we have more keynotes than a Steinway Baby Grand, let's kick off with five of the big hitters:

As mentioned, these are five standout sessions from an agenda bursting at the virtual seams with more than 30 talks – all worthy of delegates' time, we'd humbly suggest. You'll be able to judge for yourself, as the full content for VRC San Francisco will go live later this week.

If we've convinced you already, though, know that Mid Term tickets are still available.

With three boys under the age of 12, former Edge editor Joao has given up his dream of making it to F1 and instead spends his weekends transforming his living room floor into a venue for hosting increasingly complex Scalextric tracks. When in work mode, he looks after the production (aka the behind-the-scenes magic) of Steel Media's series of conferences.