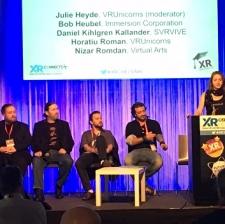 It’s been a great first day at XR Connects Helsinki, with some fascinating talks on VR, AR and MR with topics ranging from locomotion and UI to maintaining immersion and how new technology may not be the answer to finding that elusive killer app.

Here are a dozen of our highlights from day one:

1) Cherry Pop Games’ Pete Jones shared the insight that more than half of the (approx) 1,600 Steam VR games have 0-10 user reviews.

2) Jon Davies of Coatsink gave the advice that for narrative to be compelling, the protagonist (player) must face an ordeal, citing death as the most critical.

3) Bob Heubel from Immersion advises against using audio for haptic cues, as this will lack precision and could mean users experience physical feedback when it isn’t desirable, such as with speech.

4) Veli-Pekka Kokkonen peered out from under a splendid hat to tell us that alerts such as achievements ruin immersion for the player.

5) Teleportation is just a means to an end; let your game design your locomotion, says Daniel Kihlgreen Kallander, SVRVIVE.

6) VR Unicorn and one-woman dynamo, Julie Heyde, recounted how the team ended up working on something that wasn’t what they started on because it was more interesting or fun.

7) VR doesn’t have to be first or third person – you can have a view where you don’t have to be in the middle of everything says Nizar Romdan of Virtual Arts.

9) Polish developer with an impossible last name to pronounce – we should know as we introduced him on stage - Adam Robaszyński-Janiec of House Of Fables, advises developers to check work in progress using an actual headset, as what you see on the monitor – or even in simulated VR – is not the same as in actual VR.

10) Mobile VR can distract people who will think it’s the same experience as on other equipment, according to Lasse Liljedahl of Iceflake Studios, who also says ‘Don’t fall for the hype. Not everything that says VR is gold’.

11) Black Cell’s Jan Wagner believes that VR can’t simply replicate experiences we already have. It has to bring significant value add – not just an enhancement to existing tech. He also thinks it’s weird logic to bring out new hardware instead of producing more content to increase user engagement.

Wanting to use new tech to increase fidelity is an easy trap to fall into in the hunt for that elusive killer app and he doesn’t think more realism is the solution – there’s plenty of real world around you when you take the headset off, after all.

Wagner says, “We need to stop just being in love with VR,” before going on to liken it to a romantic relationship where it takes, “A different amount of work to sustain a relationship over five years”.

12) Last talk of the day was the always interesting Aki Jarvinen from Game Futures who explained that there are four basic types of presence in VR: societal and mental; emotional; embodied; and active.

That was a fantastic way to close out the first day at XR Connects Helsinki.

Five Reasons Why Any VR, AR or MR Developer Needs To Be At XR Connects Helsinki