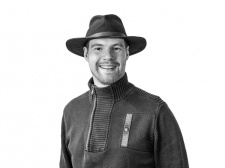 Aaron Hilton, President at Steampunk Digital, is one of 50 world-class speakers appearing at VR Connects San Francisco 2017 on the 27th and 28th June. To hear him speak in person, book your ticket now!

A: I’m the founder of the VanVR, the largest VR meetup in Vancouver BC, and one of the ‘young’ greybeards who has built 3D graphics, game engines and immersive technology for over 20 years. My new company, Steampunk Digital, builds Mixed Reality and VR related technology for clients.

A: I love what's possible; we have a technology that can interface with the very essence of human cognition. Our minds are made to live and think spatially, our imagination lives off the canvas, and finally we have the technical elements to construct anything our mind can conjure up. Our ability to make anything digitally, test it, and 3D print to fabricate that imagination is truly revolutionary. This opens the door that transcends our physical bindings, and unlock whole new categories of mass economic growth. Design at nano-scale with quantum behaviour modelling, to macro-scale sky scrapers with earthquake simulations that can test for disasters before they happen.

A: We've already seen an early spike of growth, and wonderful releases of technology that proves the experience is as ground breaking as imagined. Some truly exceptional releases have come out from Google with Tilt Brush and Google Earth for VR, and immersive stories from the likes of Cloudhead Games. The recent dip in sales is a healthy re-assesment of what is real versus what is marketing hype, and we're seeing critical hardware releases laying the groundwork.

A: We are just barely getting started. I look forward to fully untethered VR and full mixed reality headsets with position aware controllers in 12 months. We will finally realise that 360 film isn't VR. Gear will go away, Daydream is but a stop-gap to full positionally tracked mobile VR and soon we'll actually have light-field and related holographic recording tech that bring immersive VR experience recordings to life. Also expecting that woman driven VR tech will emerge, setting the pace with better UX and social elements. Come see my talk for the far future plan.

A: There is a tsunami of new brilliant innovations and San Francisco appears to be the world hub of it all. Looking forward to seeing Aruna's work at Digital Domain; building visual effects has always been a big highlight.

Don’t miss your chance to hear Hilton discuss the future of Mixed Reality at VR Connects San Francisco. His session is at 17:45 on the 28th June 2017. Book your ticket now!

Aaron Hilton is an entrepreneur and technologist. Aaron has deep roots in VR/MR and 3D engine, iOS app development, game creation, real-time visual effects, video scripting and production, and most importantly user experience design. He is the founder of the VanVR Meetup that promotes the VR creative scene. When he’s not modelling the latest wireless VR headset, Aaron can be found tinkering with electronics, throwing people with Aikido chop-chops, or riding a horse. Here's our 2016 Steampunk Digital Sizzle Reel.

Studying Games To Make Them