Past, Present And Future Collide At VR Connects San Francisco 2017 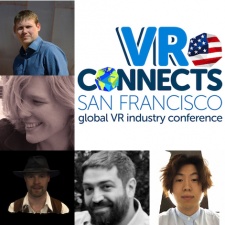 If you’re one those people that’s kept awake at night pondering the future, then you’ll definitely want to pay close attention to the Future Visions conference track at this year’s VR Connects San Francisco 2017, which takes place on June 27th and 28th. Future Visions will look at everything from Nintendo’s failed Virtual Boy, all the way through to Microsoft’s MR future and is set to tackle not only how we got to where we are, but also exactly what the future has in store.

Here are some of the speakers and talks that Future Visions will feature:

Where Did We Come From?

Kicking things off, we have Brandon Laurino with this track’s Keynote talk entitled A Timeline In Innovation. Brandon will dive all the way back to the very first VR technology, before taking the audience on a trip through time to investigate how exactly we got to where we are today and what lessons we can take from the past to apply to the future.

The Future Of VR

We’ll then have two talks investigating exactly where the VR industry is heading, from both the consumer and industry perspectives. The first of these talks comes from VR and Fun’s Editor SJ Kim, who’ll be taking a look at the longevity of the VR industry. This will include looking at consumer trends and opinions and what's needed to take the industry to the next level.

SJ Kim will then be followed by Otherworld Interactive’s Andrew Goldstein, who will be discussing the future application of immersive content with Virtual Reality. Andrew will examine the future of Virtual Reality content from a VR development perspective, whilst also making some key predictions for the future of the industry. This will include answering key questions such as where is the industry going, and what can we expect in five years.

Obviously though, VR is only one part of where the immersive industry is heading and VR Connects San Francisco certainly hasn’t forgotten about AR or MR either. In fact, we’ll also be exploring what the future holds in store for both AR & MR too, thanks to Thoughtfish’s Christina Barleben, and Steampunk Digital’s Aaron Hilton.

Starting with Christina, this talk entitled AR: The Sleeping Giant will look to challenge the notion that VR is the future of interactive entertainment. Christina will do this not only by looking at what AR is all about, but also by questioning whether our definition of AR adequately describes its full potential. Finally we’ll then have Aaron guiding the audience through every aspect of the often confused Mixed Reality field that's predicted to explode in coming years.

Of course, Future Visions is just one of the tracks at VR Connects San Francisco, and actually makes up only a small part of the 30+ strong track list. We’ve already revealed our Superstar Sessions that include the likes of Unity, HTC and Digital Domain and we’ll have more talks to reveal in the coming weeks, covering VR development, business and monetisation, and even how to secure that all-important investment.