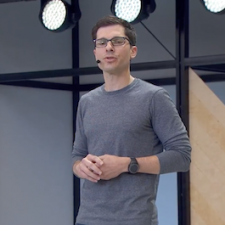 While Google may not have revealed its standalone VR hardware at Google I/O 2017, the developer event in Mountain View, California, it has shared that it is working on a solution.

Clay Bavor, VP VR at Google, took to the stage to say that, “We see VR and AR in the same way... VR can be transporting. We can experience not just what it’s like to see someplace, but what it’s like to be there. And AR uses your surroundings as context and puts computing into the real world.”

After sharing the news that Daydream is coming to LG’s next flagship phone, as well as Samsung Galaxy S8 Daydream through an update, Bavor went on to say that, “An entirely new kind of VR device is coming to Daydream”.

By which he meant, “Standalone VR headsets and we’re working with partners to make them”. He went on to say that the all-in-one system makes it as easy to get into VR as, “One step and two seconds”. Much like Microsoft’s approach to VR hardware, the Californian search engine company is taking a platform approach and working with partners to build the hardware. The work started with Qualcomm, while partners for consumer hardware include HTC and Lenovo. Bavor said that these devices will, “Start to come to market later this year”.

Bavor claimed significant advances in precise tracking with the development of World Sense that enables positional tracking. He described how Tango could work in concert with Google Maps and something he called Visual Positioning Service to deliver unprecedented detail in information based on location. The scenario he portrayed was using Maps to arrive at a large hardware store, before the camera can direct you to the exact location for your product. As he put it, the upshot being that, “GPS can get you to the door, then VPS can get you to the exact item you’re looking for”.

While the rest of the world gets hung up on the differences between VR and AR, Bavor simply says they’re “Two different flavours of... Immersive Computing. Computing that works more like we do”, before adding that, “We see VR and AR changing how we work and play, live and learn”.

As for the future of VR, AR, Immersive Computing or whatever you choose to call it, Bavor said, “We’re incredibly excited about what’s ahead”.