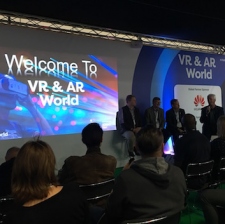 We visited this year’s VR & AR World at ExCeL London on a remarkably mild Wednesday in October to speak with industry leaders, get hands on with new gear and see what we could learn from a packed conference schedule.

Here are the 10 things we learned in no particular order:

1) Bioinspired cameras could hold the answer to computer vision

Conventional cameras capture a stream of still images that are designed to look good to the human eye. But our eyes don’t pass on all the information they gather to the brain; they ‘pre-process’ the image and only pass on information about what has changed in the scene. Dr Christian Brandli, Co-founder and CEO at Insightness is developing a camera that works on the same principle for computers, enabling lower spec processors to handle AR functionality. As he says, “Dead pixels don’t use compute power.”

2) AR will drive the development of AI

AR needs to interpret a huge amount of data to compile the results it serves to the user’s display. So Blippar developed what they call ‘the only visual discovery browser’, where the software learns to identify objects and scenes that it is shown. There’s obviously still a long way to go, as the tags Blippar identified for a trade show in an exhibition hall included ‘outdoors, daylight, recreation’.

But a high and stable refresh rate will still be important too.

4) The biggest VR opportunities in China are in software

With a huge installed user base and inexpensive manufacturing in China, consumers and distributors are hungry for more content.

5) VR Investors are more interested in talent and track record than revenue – for now...

Unusually for people that know their ROIs better than their ABCs, investment in VR isn’t about the bottom line, because the medium is so new. Investors are looking for teams with VR and games experience; they’re investing in people, not products.

Hollywood blockbusters won’t work in VR, because you’ll miss those flashbang explosions while you’re taking in the scenery. Instead, genres that have waned in popularity may make a return, such as mysteries. We can see whodunnits being a perfect fit for the medium as you explore the scene to get a step ahead of the protagonist.

We have no data to back this up, but it’s certainly an attention-grabbing soundbite and an indication of just how advanced the Chinese market is already.

8) Even the experts can’t agree on terminology

It’s no wonder so many people are confused about the differences between VR, AR and MR when even leading industry professionals can’t agree on what it all means. We have to admire Vicky Roberts, Head of Communications at vTime for piercing the bubble when she said, “Mixed Reality is what Augmented Reality was supposed to be in the beginning, but the technology wasn’t good enough.”

Don’t take our word for it; that’s what Dean Johnson, Head of Innovation at Brandwidth found when he tried the experiment for T3 magazine. He said, “It’s very weird!”

10) VR tech will be broadly similar in five years, just smaller and lighter

We’re not convinced by this one, but we thought we’d share the consensus of one panel in case you want to lower your expectations and avoid disappointment. For our part, we’re looking forward to haptic suits and brainwave tracking...