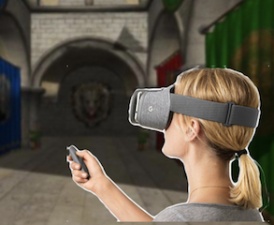 The proposed pipeline takes advantage of the characteristics of human visual perception, enabling high visual output at lower compute and power cost. Google explains that in the human visual system, the fovea centralis allows us to see clearer in the centre of our vision, with less focus on our peripheral vision. Foveated rendering uses this characteristic to reduce the spatial resolution of objects seen in our peripheral vision while using a headset, in turn reducing the compute per pixel.

Google isn't the first to explore foveated vision; other companies, such as Fove, have been working on similar methods with other members of the Open XR Group.

Different methods detailed by Google include foveated image processing and foveated transmission, all with the aim of using human characteristics to benefit XR experiences with more efficient ways of transmitting data. Google, through its research, wants to enable a new generation of lightweight, low-power and high-resolution headsets.

Eric Turner, Software Engineer for Daydream said, “This topic has been an active area of research for many years and it seems reasonable to expect the appearance of VR and MR headsets with foveated pipelines in the coming years.”